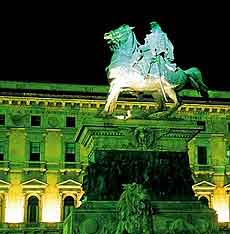 While the ancient heritage of Milan may be a little obscured by its towering modern skyscrapers within the Porta Nuova financial district, you just need to head to the Piazza del Duomo to instantly be swallowed up in its past. Here you will discover some of the finest landmarks of yesteryear, such as the Gothic-style cathedral, the royal palace and the Galleria Vittorio Emanuele II. You can also stroll around this part of the city and identify the remains of arches and gateways built during the Napoleonic rule (1805 to 1814).

Presiding over the Piazza Sempione is the Arco della Pace, or 'Arch of Peace', erected here in central Milan during the early part of the 19th century to pay tribute to the victorious Napoleon Bonaparte. Close by and on the other side of the Parco Sempione is the Castello Sforzesco, which formerly functioned as the rather opulent home of the Duchy of Milan and currently ranks amongst Europe's largest citadels.

Although many new stylish buildings have arrived in the city in recent years, there are a couple of early skyscrapers that deserve a mention, both of which date back to the middle of the 20th century. The Velasca Tower (Torre Velasca) is famed for its medieval character and overhanging top section, while the Pirelli Tower (Grattacielo Pirelli) appears much more modern, being an important icon of postwar reconstruction and remaining amongst the world's tallest reinforced concrete creations.

Address: Piazza Sempione, Milan, Italy
Located within the Parco Sempione and next to the Piazza Sempione, the majestic Arco della Pace literally translates as 'Peace Arch'. Originally to be named the 'Victory Arch', construction was slow, beginning in 1807 and later abandoned following the fall of the Napoleonic Kingdom of Italy in 1814. Work resumed just over a decade later and this monumental marble landmark was finally completed in 1839, measuring in at around 25 metres / 82 feet in height by some 24 metres / 79 feet in width, and topped by the bronze 'Chariot of Peace'.

Address: Via Manzoni, Milan, Italy
The arches of Porta Nuova originally began their life as part of an ancient medieval wall constructed towards the end of the 12th century. Extensively restored in the 1860s, the arches served as a gateway into the city and today reside on the north-eastern side of the city centre. Although at first glance this structure may appear to be fairly plain and simple, when viewed from the Piazza Cavour side a sculpture depicting Madonna and child will be revealed, while the Via Manzoni facade features replicas of tombstones from the 1st century.

Porta Ticinese (Gate to the Ticino)

Address: Via Molino delle Armi, Milan, Italy
The medieval Gate to the Ticino marks the site of an ancient Roman port and it was once here where the Seveso River and the Norone River joined together to become the Vettabbia Canal. Although the exact age of the gateway is unclear, it is known that it was an integral part of the 12th-century walls. An additional younger gateway of the same name was erected close by in the 16th century as part of the Spanish walls. It was later rebuilt in the 19th century and features grand pillars and columns, and it is this structure that most people think of today when referring to the 'Porta Ticinese', giving its name to the surrounding district. 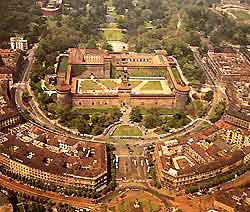 Located on the north-western side of the city centre and backing on to the Parco Sempione, the Sforza Castle was built in the 1360s. Later enlarged and remodelled in the mid-15th century by Italian condottiero Francesco Sforza, the castle was transformed into a splendid ducal palace and became one of the most important Renaissance landmarks remaining in the city. The subsequent centuries saw the fortress further modified, restored and even used by the military. World War II brought with it much damage and the future of the castle was uncertain, although a major restoration project ensured that the Castello Sforzesco can once again be enjoyed by future generations. Several museums and galleries are based in the grounds, with visitors being able to view old frescoes within the Ducal Chapel, a painted ceiling created by the hand of Da Vinci, and the last of Michelangelo's sculptures, which remains unfinished.

Address: Piazza Duca d'Aosta, Milan, Italy
The city's principal train station, the Milano Stazione Centrale, was constructed between 1912 and 1931, being built to replace the older station, which was noticeably struggling to cope with increased passenger numbers following the arrival of the Simplon Tunnel in 1906. Located on the north-eastern side of Milan and fronting the Piazza Duca d'Aosta, this major transport hub really is a very beautiful building, with grand Art Nouveau elements and a cavernous ticket hall. Today there are a total of 24 different tracks, with roughly 500 daily trains serving more than 300,000 passengers, many of which are en-route to Austria, France, Germany, Spain and Switzerland.

Address: Piazza Velasca 5, Milan, Italy
An old and very recognisable landmark, the Torre Velasca is an early skyscraper from the 1950s, sited close to the campus of the University of Milan. The tower was created by the architectural partnership of Banfi, Belgiojoso, Peressutti and Rogers (BBPR), who built this high-rise structure to provide office space, designing the upper section to overhang considerably, making it appear rather like a tall rectangular mushroom. Visible from the skyline, this 100-metre / 328-foot tower was influenced by Italian medieval fortifications and this is clearly apparent when viewed from a distance.

Address: Piazzale Duca d'Aosta, Milan, Italy
A stylish contemporary skyscraper, the Grattacielo Pirelli is still quite futuristic in its appearance, with its gleaming glass facade making the building appear quite silvery and metallic. The tower was built between 1956 and 1960, on the site of Giovan Battista Pirelli's original tyre factory, and is just under 130 metres / 427 feet high. This was actually the very first building in the city to exceed the height of the Duomo, and so a statue of the Virgin Mary was placed on the roof to honour the cathedral. In 2002, a small airplane running low on fuel wandered off course and crashed into the building, causing three deaths, considerable damage and ill-founded fears of a terrorist attack.