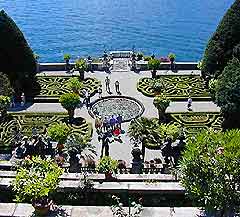 Milan, Italy can really boast about its wide variety of parks, ranging from the largest parks to the smallest gardens in Milan, both private and public. You would never imagine that the busy city of Milan would have so much greenery - if you know where to look!

The parks and gardens both in and around Milan, Italy include many that were the former private gardens and parklands of the city's nobility and whether it is just a small square with surrounding trees or a larger open space, they are all peaceful places to relax.

Address: Bastioni di Porta Venezia, Milan, Italy
Milan's Public Gardens extend for around 16 hectares / 40 acres and it is the largest city park in Milan. Designed in 1786 by Piermarini, the gardens were made larger in 1857 and further changes have been made over the years. These beautiful gardens are located in north-east Milan and are the ideal place to unwind, away from the busy city centre. There are three small lakes and countless monuments and statues. Also, at the far end of the gardens is the 18th-century Palazzo Dugnale, housing the Greenhouse Laboratories, part of the Milan Natural Science Centre.
Open hours: daily - 06:30 to sunset 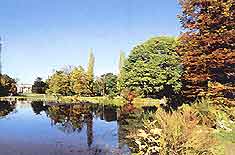 Address: Piazza Sempione, Milan, Italy
This large park is located in north-west Milan and covers an area of around 47 hectares / 116 acres. The gardens occupy a part of the old Visconti Ducal garden, which was enlarged in the 15th century to make an enormous 300-hectare / 740-acre hunting reserve. The present day layout was designed by Emilio Alemagna in the early 1890s, who created an English-style garden. In World War II, Milan's
Parco Sempione was used to cultivate wheat and soon returned to its former structure once the war ended. Highlights include a large artificial lake, a monument to Napoleon III, a sulphur water fountain and the Torre del Parco, which is a tall tower made of steel tubes in 1932.
Open hours: daily
November to February - 06:30 to 20:00, March to April - 06:30 to 21:00
May - 06:30 to 22:00, June to September - 06:30 to 23:30, October - 06:30 to 21:00

Address: Via Francesco Sforza, Milan, Italy
Located in south-east Milan, these are the city's oldest gardens and were laid out almost 500 years. Shortly after its initial landscaping, the gardens were further enhanced and a formal, Italian-style garden was created, with a large goldfish pond and two terraces. There is also a 17th-century shrine representing Mary Magellan, a Neo-Classical temple and nearby, a large Synagogue.
Open hours: 08:00 to 17:00
Admission: charge

Address: Piazza della Vetra, Milan, Italy
The Parco delle Basiliche is a vast area of greenery, situated between the basilicas of Sant'Eustorgio and San Lorenzo. Until 1840 the square was used for public hangings of condemned commoners and during the Roman era there was a small port here. Today it is worth visiting for the magnificent view of the apses on the basilicas.
Open hours: daily

Address: Via Motta 2, Gardone
Tel: +39 (03) 652 0347
The Giardino Botanico Hruska contain over 8,000 exotic blooms and plants. Laid out amongst artificial cliffs and streams, the botanical gardens provide interest whatever the time of year.
Open hours: daily, mid-March to mid-October - 09:00 to 18:00
Admission: charge