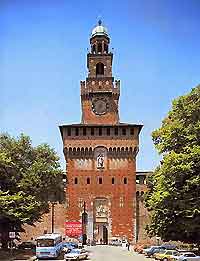 A city rich in style and fashion, Milan also comes with more than its fair share of leading tourist attractions. When you first arrive in Milan, do treat yourself to a guided tour of the city, whether on foot or by bus, so that you can see what attractions are on offer and where exactly they are located.

The Teatro alla Scala opera house is a particularly notable place of interest in the city, as are the many palaces of Milan, such as the Palazzo Borromeo, the Palazzo Marino and the Palazzo Real, amongst many others. Further tourist attractions within the city include the Meazza (San Siro) Stadium, the Rotonda della Besana, and the Giuseppe Verdi Music Conservatory (Conservatorio di Musica Giuseppe Verdi). There may also be a show or event of some description taking place at the enormous Fiera di Milano (Trade Fair) complex.

Air-conditioned guided bus tours operate daily in Milan, with English speaking guides on board the bus. Time is allowed to walk around at some of the stops and take in the many sights. The three-hour APT bus tour departs from the APT Information Officer at Via Marconi 1, off Piazza del Duomo and sights include the cathedral, Sforza Castle and entrance to see Leonardo da Vinci's 'The Last Supper ' at the Santa Maria delle Grazie.

Daily walking tours are also popular and take in many of the city's most interesting attractions and landmarks. Lasting around two hours, the tours depart from the APT Information Office at Via Marconi 1 every Monday morning at 10:00. 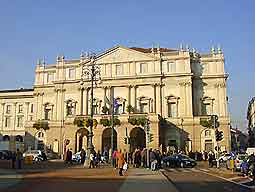 Address: Piazza della Scala, Milan, Italy
Tel: +39 02 720 037
This large opera house was built in 1776 by Giuseppe Piermarini on the central site of Santa Maria della Scala, an old church that was built in 1381. In 1943 it was badly bombed and rebuilt three years later. Highlights include the Museo del Teatro (theatre museum) which was founded in 1913 and is home to a fine collection of sculpture, paintings and ceramics, and also La Scala's Ballet School which was founded in 1813 and has produced many famous students. The traditional opening night of the opera season takes place on the 7th December, on the feast day of Sant'Ambrogio, the patron saint of Milan. 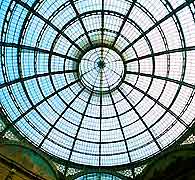 Address: Piazza della Scala, Milan, Italy
The Galleria Vittorio Emanuele is a large and elegant arcade, lined with shops, bookstores, cafés and a famous restaurant, Savini. Designed to join the Piazza della Scala and Piazza del Duomo, construction started in 1865. The gallery was opened just two years later by the king, Vittorio Emanuele II, its namesake. It features a 47 metre / 155 foot high glass dome, standing above the central octagonal area and also some beautiful mosaics on the floor.

Address: Piazza Borromea, Milan, Italy
Situated in central Milan, this grand 15th-century palace was badly damaged by bombing in 1943 and much of it has since been rebuilt and restored. There are courtyards, many frescoes and in one room, Sala dei Giochi, there is a large, well-known painting of the aristocracy playing games, where the original blue of the sky has undergone a chemical reaction which has changed its colour to red. 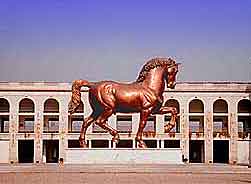 Address: Via Piccolomini 5, Milan, Italy
Tel: +39 02 404 2432
Milan's Meazza Stadium was named after Giuseppe Meazza, a famous footballer who played for both the Inter and Milan city teams. It was originally built in 1926 and has since been rebuilt and renovated. It now has a capacity of around 85,000 and is Italy's number one stadium. It is also often referred to as San Siro, after the surrounding district. An enormous sculpture of a horse was created in 1999 and sited between the Meazza Stadium and the nearby San Siro racetrack. It was actually designed by the famous artist Leonardo da Vinci, who never found the time to construct it himself.

Address: Piazza della Scala, Milan, Italy
Designed in 1558 by Galeazzo Alessi for the banker Tommaso Marino, construction started shortly afterwards. It was not completed until 1892, when the facade was finally finished. It has been Milan's town hall since 1860 and was the birthplace of Marianna de Leyva, the famous nun of Monza.

Address: Piazza del Duomo
Tel: +39 02 8646 1394
The Palazzo Reale is located in central Milan and was the seat of the commune administration in the 11th century. It was completely rebuilt in the 1330s and became the headquarters of the lords of Milan. In 1598 it housed the first permanent theatre in Milan and Mozart actually played here when has was a child. The city purchased this grand building in 1965 and converted it into offices and museums, including the Civico Museo d'Arte Contemporanea (CIMAC), containing the futuristic art collection.
Open hours: Sunday to Wednesday - 09:30 to 20:00 (14:00 on Monday)
Thursday to Saturday - 09:30 to 23:00

Address: Piazza Mercanti, Milan, Italy
Built in 1233 by the chief magistrate Oldrado da Tresseno, this courthouse is also often referred to as 'Broletto Nuovo' and the first floor was used as the law court. Underneath, busy markets were held and in 1773, another storey was added, to house the notorial archive.

Address: Piazzale Cimitero Monumentale, Milan, Italy
Tel: +39 02 8846 5600
The Cimitero Monumentale contains many tombs and shrines, produced by famous sculptors. It was created in 1866 and is simply vast, covering an area more than 250,000 square metres. Highlights include the House of Fame', known locally as Famedio, a striking building with architecture resembling the pantheon, where many notable people have been buried and entombed over the years, with some truly spectacular shrines. The Cimitero Monumentale is situated in north-east Milan and there is a free map of the cemetery available at the entrance.
Open hours: Tuesday to Sunday - 08:30 to 17:15

Address: Via Brera, Milan, Italy
This palace, situated in north-east Milan, was originally built around 500 years ago and in 1797 it was completely rebuilt by Giovanni Ruggeri, who was responsible for designing the late Brocade facade, ornate windows and balconies. It is widely thought that twin entrances were built for the Cusani brothers, so that they could both have separate access. In the 19th century, the palazzo was the seat of the Ministry of War.

Address: Corso Magenta 24, Milan, Italy
Tel: +39 02 8846 5720
The Palazzo Litta was built in 1648 for Count Bartolomeo Arese by Francesco Maria Richini. Around 100 years later the interior was updated and also the pink facade was added by the heirs, the Litta Visconti Arese. The palace is highly regarded and widely believed to be one of the most beautiful examples of 18th-century architecture in the region. Highlights include many stunning rooms, a typical 17th-century courtyard, a grand staircase decorated with marble and also a room that still has original 18th-century wallpaper. Since 1905, the palace has housed the State Railways offices.
Open hours: daily

Address: Largo Domodossola 1, Milan, Italy
Tel: +39 02 499 71
Founded in 1920, the Trade Fair was set up in Milan to help boost the domestic market in postwar Italy. Originally there were a number of pavilions and buildings, many of which were destroyed in the second world war, although some Art Nouveau buildings are still standing and in good condition. Since 1985, the Milan Trade Fair has become an important exhibition centre, one of the leading facilities in Europe, and now hosts a large number of specialist international shows. Each year the Fiera di Milano attracts almost three million visitors and over 30,000 exhibitors.

Address: Via Conservatorio 12, Milan, Italy
The Giuseppe Verdi Music Conservatory in south-east Milan was founded in 1808 and over the years many important musicians and composers have studied here, although Verdi himself was actually refused admission when he was young. It also houses an interesting collection of musical instruments, an impressive library with over 30,000 books and almost 500,000 pieces of music.

Address: Corsa di Porta Vittoria, Milan, Italy
The Palazzo di Guistizia was built between 1932 to 1940 in south-east Milan and is home to the Milan Law Courts, notorial Acts Archive, 1,200 rooms, 65 law courts and also some contemporary works of art. In the early 1990s the building was very much in the headlines because of the Mani Pulite (clean hands) corruption inquests, which actually had a great influence on the face of Italian Politics.

Address: Corso Monforte 35, Milan, Italy
Tel: +39 02 7740 2973
Dating back to the 15th-century, Milan's Palazzo Isimbardi has been enlarged over the years by the many noble families who lived there. In 1775 it was purchased by Isimbardi who soon made many alterations of his own. It has been the seat of the Milan Provincial Government since 1935 and was only recently opened to the general public. It is situated in south-east Milan and highlights include original herringbone pattern paving, many interesting and highly decorated rooms, works of art, frescoes, glass chandeliers and a landscaped garden.

Address: Via San Barnaba, Milan, Italy
The Rotonda della Besana in Milan has had a colourful past, with the building having many uses. It was designed in 1695 by Francesco Raffagno and was the cemetery of the nearby Ca' Granda Hospital. In 1783 it was closed and an estimated 150,000 people were buried in the crypts under the arcades. It has since housed patients with infectious diseases, become the hospital laundry and is now used for many important, temporary exhibitions. Also, in the summer, there is an outdoor cinema where a number of different films are shown.

Address: Corsa di Porta Vittoria 6, Milan, Italy
Tel: +39 02 782 219
Constructed in the 18th century, Milan's Palazzo Sormani Andreani was enlarged shortly after and quickly became one of the most extravagant residences in Milan. After the end of the second world war, the palace became the home of the Municipal Library and now houses Stendhal's private library. With over 600,000 works, including over a newspaper library with more than 20,000 Italian and foreign papers, a record / CD collection and much more, this is the largest library in Milan.
Open hours: Monday to Saturday - 09:00 to 19:30