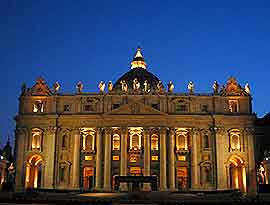 More than just a city, the Vatican is actually the world's smallest independent sovereign state, established by the Lateran Treaties in 1929. It is ruled by the Pope and covers an area of just 108 acres / 43 hectares.

Close to the right bank of the River Tiber, the Vatican City has its own civil and judicial systems, post office, bank, newspaper, radio station, supermarket and railway station. Often referred to as the Holy See, the most popular places to visit include St. Peter's Basilica and the Sistine Chapel.

The Pope usually gives a public audience at 11:00 every Wednesday, and if you wish to attend you should apply at the nearby Prefetura della Casa Pontifica on the day before.

These beautfiul gardens can only be seen with a guided tour and this should be booked at the tourist office, at least 24 hours ahead. The Vatican Gardens contain monuments, fountains, grottoes and forticifications, dating from the 9th century to the present day. There are many styles of garden, all immaculate and maintained by 30 full-time gardeners. Gardens include a formal Italian garden, a French garden filled with flowers, a romantic English landscape and a small wooded area. Covering 40 acres / 16 hectares, tours take place on Monday, Tuesday, Thurday, Friday and Saturday from March to October, and at other, less frequent times for the rest of the year. Regulations prohibit photography in the gardens. 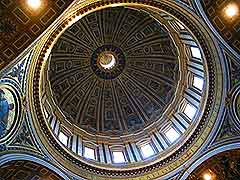 Address: Piazza San Pietro, Rome 00193
Tel: +39 (0) 6 98853 18
First opened in 326 AD, this great temple stands over the tomb of St. Peter, the founder of the Church of Rome. It was torn down during the Renaissance, to make way for a grand basilica which took around 150 years to complete. The dome, which dominates the church, was designed by Michelangelo and you can reach the top by using an elevator and stairs, where there are some stunning panoramic views of the city, from over 100 metres / 328 feet high. The church contains a number of well-known works, including the canopy over the high altar, a majestic creation by Bernini, the gilt bronze Chair of St. Peter, the monument to Clement XIII by Canova, and Michelangelo's famous 'Pietà', a wonderful marble sculpture. The Basilica is nowadays 187 metres / 613 feet long and 132 metres / 432 feet high and is the heart of Christianity. The cavernous interior holds a staggering 60,000 people for services and blessings. 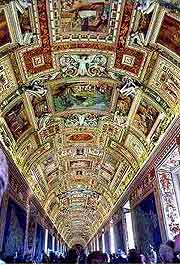 Address: Viale Vaticano, Rome, Italy
Tel: +39 (0) 6 6988 4947
The Vatican Museums are a group of palaces which house some of the most important collections in the world. There are several exhibitons, including the Etruscan Museum, Raphael Rooms and Loggias, the Egyptian Museum and the world-famous Sistine Chapel, which is probably the most important part of this vast museum complex. Also worth a visit are Raphael's Rooms (Stanze di Raffaello), several rooms of the Vatican apartment that were painted by Raphael at the request of Pope Julius II. The Vatican Museums are part of the Vatican Palace, which has been the official residence of the Pope since 1377. With painted ceilings, chapels, an estimated 1,400 rooms and many galleries, there are approximately 5 miles / 8 km of exhibits.
Open hours: daily - 08:45 to 16:45, Satudays to 13:45
Admission: charge - free entrance every last Sunday of the month

Built for Pope Sixtus IV in 1475, the Sistine Chapel is probably the Vatican's ultimate building and crowning glory. In 1483 it was decorated by some of the best painters in the world - Botticelli, Ghirlandaio, Pinturicchio, Signorelli and others. However, it was Michelangelo whose painting of the vast ceiling and his masterpiece 'The Last Judgment', that have made this chapel famous throughout the world. Pope Julius II ordered Michelangelo to paint the ceiling of the Chapel in 1508 and this was an enormous task to undertake. The ceiling is 929 square metres / 10,000 square feet and it took him over three years to paint the scenes, some of which depict the story of creation, for which he was paid very little. Michelangelo's painting 'The Last Judgment' was painted on the wall over the altar in 1541. When it was unveiled it shocked many Vatican officials, especially one member, Biago di Cesena, who critised its indecent nudes. In retaliation, Michelangelo painted Biago's face on a figure with donkey's ears in Hades and he also painted his own face on the wrinkled human skin in the hand of St. Bartholomew.

This enormous library contains thousands of codices, manuscripts and early printed books. Some of the most interesting books, of which there are more than 1.5 million, are exhibited in the Sala Sistina, including copies of Virgil's works dating from the 4th and 5th centuries, love letters written by King Henry VIII to Anne Boleyn and also some poems by Michelangelo written in his own hand.

This gallery was built in 1932 for Pope Pius XI to house the Vatican collection, which was started by Pope Pius VI in 1800. There are some wonderful works of art by Giotto, Cimabue, Raphael, Crivelli, Leonardo da Vinci, Titian, Domenichino, Caravaggio to name but a few, and also a room dedicated soley to modern art.