Getting Around, Rome Travel, Transport and Car Rental 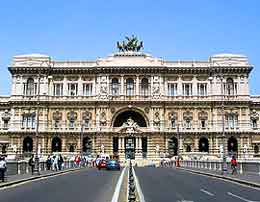 Rome is a relatively easy city to get around. The centre is fairly compact and most of the sights are within walking distance of one another. Much of Rome is pedestrianised and if you are in the city centre there is an excellent bus network and local railway. Alternatively, if you prefer to be driven around there are plenty of taxis, although these can prove an expensive way to travel.

There are two busy airports located in Rome, namely the Ciampino International Airport (CIA) and the Leonardo da Vinci Fiumicino International Airport (FCO). Fiumicino is by far the biggest, enjoying annual passenger figures in the region of 40 million and serving more than 100 different airlines, with the greatest choice of onward destinations being provided by Alitalia, Blue Panorama, EasyJet, Vueling Airlines and Wizz Air. Although Ciampino is an altogether smaller operation, it is still a very sizeable facility, handling around 5 million passengers annually and serving budget airlines such as Ryanair and Wizz Air.

You may well have heard the saying 'All roads lead to Rome'. To some extent, this really is quite true in central Italy. The Italian capital is surrounded by an extensive network of busy roads and encircled by a motorway named the Grande Raccordo Anulare - GRA for short. Rental cars are easy to obtain from both the Ciampino and Fiumicino airports, being arranged within the Arrivals Halls.

Do bear in mind that the traffic in Rome is often quite chaotic and certainly a challenge at times. Italians are known for being fairly aggressive and fast drivers, and so you will require plenty of patience and confidence if you are planning to get behind a wheel in this busy city. Some areas of the city centre are restricted for those with electronic passes, and parking spaces are usually hard to come by. Therefore, it may make sense to make sure that your hotel comes with somewhere to park your vehicle securely. Of note, in Italy, people drive on the right-hand side of the road and overtake on the left.

Even though there are only two subway lines, the Metro system still provides the easiest, cheapest and quickest way to travel around the city. Entrances to the subway are marked with a large white 'M' on a red background. The Metro opens at 05:30 and the last trains leave at either 23:30, or at 00:30 on Saturdays. Both lines intersect at Termini train station:

Although taxis in Rome do not cruise around the streets, they will stop if you flag them down. They can normally be found lined up at stands and can also be called by phone. There may be some supplements, such as luggage or late night charges, that do not appear on the meter so it may be useful to ask about these before leaving. You should only use the official licensed taxis, which are yellow and white and can be clearly identified by the taxi sign on the roof and a numbered shield on the side.

COTRAL buses and ATAC trams depart from many points throughout the city and service the Lazio region. Tickets cannot be purchased on the bus itself, except at night. Instead, they are sold at tobacconists, newsstands, some coffee shops and ticket machines and booths in Metro stations and at some bus stops. Day tickets are available, and these are valid for city and regional buses, trams, the Metro subway and other train lines. Stops are indicated by yellow panels showing the route and timetables. Travelling by bus may not be as fast as on the Metro subway, but it is certainly more scenic. 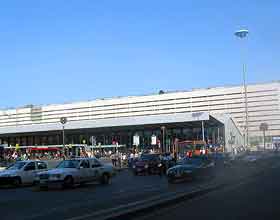 Rome has an overground railway network which is a useful way to travel if you are heading out of the city. There are long-distance trains available that travel to the cities of Florence and Venice. For destinations that are within 62 miles / 100 km of the city you are able to purchase a kilometrico ticket. Like bus tickets, these can be bought at a variety of outlets and also at the train stations. They must be date-stamped in the machines near the train before you board and remain valid for six hours from the time they were stamped.

This is an excellent way to travel around the city and many locals use scooters to quickly reach their destinations. There are several rental agencies in the city and riders are required to wear helmets by law.

Cycling around the city of Rome is a pleasant way to travel - when the traffic is light. Although the districts tend to be fairly flat, Rome is built on seven hills and so is not an ideal place for cyclists. The banks of the River Tiber are certainly a popular and pleasant place to cycle, which is flat. There are many bicycle rental shops in and around the city centre.