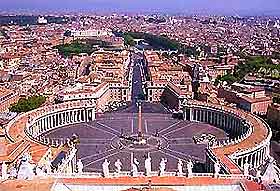 Rome really is like no other city on the planet and the tourist attractions here certainly do come thick and fast. History is everywhere and amongst the commercialism of Rome city centre are some true Italian gems, such as the magnificent Trevi Fountain (Fontana di Trevi) and the equally impressive Spanish Steps (Scalinata di Spagna).

One particularly fun attraction worth looking out for is the Mouth of Truth (Bocca della Verità), which is known to date back to the 17th century and was carved out of Pavonazzetto marble, being most famous for its appearance in the 1953 movie 'Roman Holiday', starring Audrey Hepburn. Other important tourist attractions in Rome include the Capitoline Hill (Campidoglio) area, the Piazza Navona and its beautiful fountains, and the Castel Sant' Angelo (Mausoleum of Hadrian) fortress, which has become known for its towering cylindrical centrepiece. 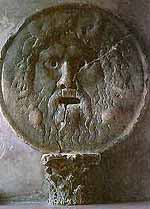 Address: Piazza Santa Maria in Cosmedin
Situated in the atrium of St. Mary's in Cosmedin church, this grim marble mask is known as the Mouth of Truth or Bocca della Verità and is actually an ancient drain cover, found half-buried in the Middle Ages. According to popular legend, if anyone puts their hand in the mouth and then does not tell the truth, the mouth will slam shut and prevent them from withdrawing it.
Open hours: daily 09:00 to 19:00
Admission: free

Address: Piazza del Campidoglio, Rome
The main attraction at Capitoline Hill is the Piazza del Campidoglio, which was designed by Michelangelo in 1538. At one stage it featured a prominent bronze statue of Marcus Aurelius. Three sides of this well-proportioned square are bordered by the Palazzo dei Senatori and the two museums, the Palazzo dei Conservatori and the Palazzo Nuovo, which are full of famous statues. The Capitoline Hill overlooks the Forum. 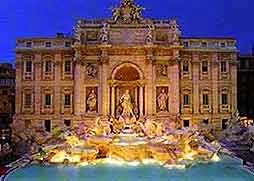 Address: Piazza di Trevi, Rome 00187
This is one of the most imposing and stunning attractions in the whole of Rome and every day it is visited by crowds of people, many tossing coins into the water. As a result, the fountain actually grosses a large amount of money each year and most of this is donated to charity. In 1730, Pope Clemente XII decided to replace the existing fountain, designed in 1453, with one of much more majesty and asked the city's best artists of that time to help him with the project. The resulting Trevi Fountain is one of undeniable splendour. The carved, marble centrepiece is a large shell pulled by two sea-horses and driven by two tritons, from which a majestic statue representing the ocean emerges. The water is turned off in the early hours of the morning and occasionally at other times for cleaning, so if it is empty when you arrive, make sure that you return to see it in full flow. 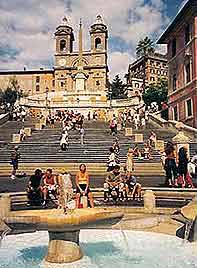 Address: Piazza di Spagna, Rome
This is possibly one of the most delightful and stunning settings of the baroque period. The spectacular staircase, built in 1723, gets its name from the nearby Spanish Embassy building, which is still the headquarters of Spain's embassy to the Holy See. It was built at the request of Pope Innocent XIII by Francesco De Sanctis, and in the spring large pots of flowering azaleas make a stunning display on the steps.

North of Corso Vittorio Emanuele and west of Corso Rinascimento is the Piazza Navona, containing four majestic fountains. The most famous fountain is the 'Fountain of the Four Rivers' which was designed and built by Gian Lorenzo Bernini in 1651.

Address: Lungotevere Castello 50, Rome 00193
Tel: +39 (0) 6 68300 183
In the 6th century, the Castel Sant' Angelo was converted into a papal fortress and linked to the Vatican palaces by a series of underground passages, and these have been used by several popes when they felt under threat. The circular Castel Sant' Angelo was originally constructed as the mausoleum of Emperor Hadrian and is now an interesting museum. It is also here that Puccini's Tosca plunged to her death.

Other attractions worth a visit