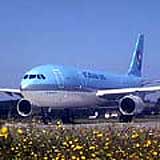 As Rome becomes an increasingly popular tourist destination, the city becomes even easier to reach, with extremely frequent flights and good connections from all over the world. Located 18 miles / 30 km south-west of central Rome and connected to the city's highway system and railway network, this airport handles a large number of international and domestic flights. The Rome Leonardo da Vinci Airport, commonly referred to as Fiumicino, also deals with daily flights to and from many UK airports.

This modern airport has three large passenger terminals which are usually very busy, and a satellite terminal nearby. Major airlines include Alitalia, Italy's national airline, British Airways, US Airlines and many others. In general, flying into Italy tends to be a relatively hassle-free experience.

The following terminals serve many airlines, travelling to a wide range of locations.

A COTRAL bus connects the airport with the Anagnina Station of Metro Line A, which takes you into the heart of Rome. The buses depart every 30 minutes from the airport terminals and ticket machines provide a convenient way to purchase tickets for the airport shuttle. At night, a bus services runs to the railway stations.

The airport is situated very close to the motorway network - the Autostrada Roma Fiumicino. Travel north on the Via Appia Nuovo and into downtown Rome.

A taxi ride from the airport into the centre of Rome lasts around 20 minutes and is a quick way to travel into the city centre. There are usually plenty of authorised, white-painted taxis lined up by the main arrivals gateway of each terminal and the fares are quite reasonable.

Two trains link downtown Rome with the airport and offer direct links to and from the central station in Rome and other stations.