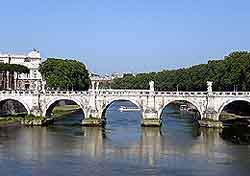 Known as the eternal city, Rome's history stretches back almost 3,000 years. Legend has it that a she-wolf suckled two young boys, Romulus and Remus, after they were left to drown in the River Tiber. They went on to found the city in 753 BC.

Modern historians question this traditional story of the city's foundation. Instead, they consider that Rome probably grew up over time as Etruscans and other local groups of people began to settle here.

The Rise and Fall of the City

In the early 6th century BC, seventh king Lucius Tarquinius Superbus was overthrown. It was this event that led to Rome becoming a republic. By the 4th century BC, political power in the city was firmly concentrated into the Senate, whose members were wealthy plebeians and patricians. In the years that followed, Rome was attacked variously by the Gauls and then Carthage. The latter conflict was known as the Punic Wars. Military conquests led to great cultural growth in the city and they also led to internal turmoil, as its political institutions failed to keep pace with urban life. In particular, there was a deepening divide between the rich and the poor.


From 44 BC, Marc Antony, Lepidus and Octavian ruled over the city as a triumvirate, with each having joint responsibilities and power. By now, after more internal struggles, Julius Caesar was serving as the dictator of Rome. Less than a year later, he was assassinated. By 27 BC, his great-nephew had renamed himself as Augustus, the first Emperor of Rome. As an empire, it was at this point that the city truly made its entrance onto the world stage, leading a great superpower that had few adversaries capable of challenging its rule.

In 64 AD, almost three-quarters of the city was destroyed in a huge fire that is said to have lasted for a week. The activities of Emperor Nero as Rome burned have been a matter for much speculation throughout history. What is clear is that by the 3rd century AD, Roman decadence had finally come to an end. The city was increasingly left to fend for itself and by the 5th century AD, Germanic tribes were already eyeing its riches. In 410 AD, the sack of Rome by the Goths was the start of an era of pillage and plunder.

After the fall of the Roman Empire, Rome became a place of turmoil as various factions battled to gain authority. The papacy succeeded in seizing control and tried to partially improve its citizen's lives. However, the city continued to be torn apart throughout the Middle Ages. The rivalry that existed between the Guelph and the Ghibelline factions was particularly bitter. In the 14th century, the papacy finally returned to Rome in the form of Pope Gregory XI. He found deserted streets, ruined buildings and a forum that was home to grazing farm animals. 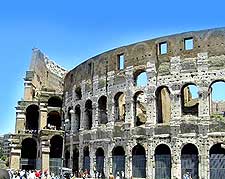 History from Renaissance Times to the 17th Century

The 15th and 16th centuries are widely regarded as a 'golden age' in the city's long history. During the Renaissance, Rome became a centre for art and architecture. Men like Michelangelo, Botticelli and Donatello flourished here, while grand buildings sprang up from the ruins. The city that emerged had new landmarks, including great palaces, lengthy roads and spacious city squares. Under Pope Sixtus IV, the Sistine Chapel was decorated with detailed frescoes. In 1527, however, Charles V of Spain invaded Rome, bringing such progress to a grinding halt. It wasn't until the 17th century that a revival led to an explosion of baroque-styled churches, fountains and monuments in the city.

Rome was at the centre of the Counter Reformation. With the support of French troops, the Romans were able to fight off attempts to rebel against the Pope. Rome was also the focus for those who supported Italian unification. However, whilst the rest of Italy was united under Piedmont from 1860, the city remained unchanged. French troops still had a presence in the city at this time. In 1870, the newly formed Italian State attempted and succeeded in capturing Rome. The city was made the capital of Italy shortly afterwards.

During the 19th century, the city outgrew its ancient boundaries and new buildings included the Palazzo di Guistizia. Many ancient structures were demolished to make way for modern developments, such as the Piazza Venezia. In 1911, King Vittorio Emanuele inaugurated a new monument here and this was known locally as the 'dentiera', or 'dentures', because of its distinctive shape.

After World War One, Rome witnessed the rise of Fascism at first hand. In 1922, Mussolini marched on the city, together with 40,000 of his supporters. It led to Mussolini being invited to form a government in Italy.

During the 1930s, the city's population grew rapidly, reaching around a million people by the outbreak of World War Two. The city escaped much of the destruction wreaked on other European urban centres, although it was subjected to German occupation until its liberation in 1944.

During the post-war period, Rome became a fashionable place to visit. It epitomised 'la dolce vita' and has been the backdrop for many major films, including both 'Roman Holiday' (1953) and soon after, 'Ben Hur' (1959).