Rome is one of the world's great capital cities and Romans are cheerful, friendly and generally very helpful, although they are possibly less excitable than those in other areas of Italy. Good manners are welcome everywhere and expected by most people. Rome is undeniably a major-league cultural and historic city and worth a visit, whatever the time of year.

Most Italian words are pronounced exactly as they are written, syllable by syllable, and there is often an emphasis on the last letter, e.g. Roma. A knowledge of Latin can be useful, both as the basis for Italian and also for reading the inscriptions on many monuments. Although Italian is the language of the land, English is generally understood at most attractions, museums, hotels and restaurants that cater to visitors. In smaller towns and villages nearby, a phrase book is a useful item to carry.

Tipping is quite discretionary, with taxi drivers usually being given a 10% gratuity or thereabouts. Restaurants often include service charges and these are always clearly stated on the menus, although a small tip will still be expected. In Italy, even theatre and cinema usherettes expect a tip for showing you to your seat. Hotel staff, such as luggage handlers, happily accept a small tip. Generally, no other public service workers expect tips. You should always pay tips in cash, as this way you can be sure that the person it is intended for receives it fully.

It is hardly surprising that Rome brims with Catholic churches as around 85% of Italians are estimated to be Catholic. Of the remaining, the major religions include evangelical Protestants, Jehovah's Witnesses, Muslims and most other religions are represented. There are an enormous number of churches that welcome visitors and some even hold regular masses in English.

In many buildings and public transport, rules restrict smoking and this is usually indicated by no-smoking symbols in prominent places. Most pubs and bars welcome customers who wish to relax with a drink and smoke, as a high percentage of Italians are smokers. 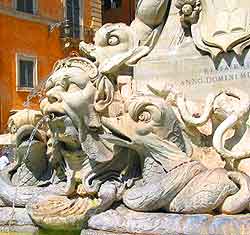 The Euro is made up of eight coins and seven paper notes and was introduced on January 1, 2002. The 12 original members of the European Union - Austria, Belgium, Finland, France, Germany, Greece, Ireland, Italy, Luxembourg, Netherlands, Portugal, and Spain - planned the event for more than a decade, determining a conversion rate for each country's national currency. The colourful Euro bills, which include holograms and shades of green, yellow, blue, mauve, and orange, are identical across the Euro area. Coins have one common and one national side, but they can be used in any of the 12 countries, regardless of the country of issue. Old currencies are no longer accepted, although they can still be converted to Euros in central banks.

The city's tourist information service (APT) has several offices in Rome. In the central hall at Staziona Termini, there is an office that is open daily from 08:15 to 19:15. The main APT office is situated at Via Parigi 5 and is open Monday to Saturday from 08:15 to 19:15. There are several other smaller branches, including one at the Fiumicino Airport and all have a wide range of information on accommodation, museums, festivals, concert seasons as well as details on local and intercity transport.

The biggest threat in Rome is by bag-snatchers and pickpockets. These thieves are very skilled, so be particularly careful with hand baggage. Wear a bag or camera across your body, or even use a concealed money belt.