A visit to Rome so often involves learning about the city's ancient past and Roman heritage, with its archaeological sites and landmarks being amongst the world's most impressive and important, offering a real insight into the events that took place here some 2,000 years ago.

When asked to picture a landmark of Rome, most people will immediately conjure up an image of the iconic Colosseum. Formerly named the Flavian Amphitheatre, this enormous elliptical structure remains the largest ever to be built by the Romans and whilst it is partly ruined, it is nevertheless quite awe-inspiring. Although many visitors to Rome will know of the Colosseum's past gladiatorial combats and gruesome fights, most will be surprised to learn that entertainment also consisted of transforming the arena into a temporary jungle, where exotic African giants such as elephants, giraffes, hippos and even rhinos were slaughtered for the amusement of the thousands of cheering spectators.

Sightseers looking for further landmarks in Rome may like to search out the High Renaissance palace named the Palazzo Farnese and then visit the majestic Roman Forum ruins, before heading to the Piazza della Rotonda to admire the well-preserved 2nd-century Pantheon. Those exploring the Colosseum should be sure to also check out the neighbouring Domus Aurea (Golden House), which was originally covered in gold leaf and dazzled its visitors in a rather ostentatious fashion. 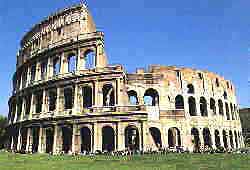 Address: Piazza del Colosseo, Rome 00184
Tel: +39 (0) 6 700 4261
Construction of the Colosseum commenced in 70 AD, when the city was under the rule of Emperor Vespasian. Ten years later the Colosseum was complete, when Vespasian's son Titus was on the throne, while additional changes were made during the following rule of Domitian.

Able to accommodate audiences of more than 50,000, the Colosseum staged many enormous events for more than 100 years, including classic chariot races, gladiator combats and fights with wild animals, which are known to have featured bears, lions, panthers and tigers. Audiences were sheltered from the heat of the strong sun by sizeable awnings. Earthquake damage paid its toll on the structure and it slowly fell into disrepair over the centuries to follow. In the 14th century, the site had become something of a quarry, with huge chunks of travertine being used to build the Palazzo Venezia. Soon after, Pope Benedict XIV decreed that the remains should become a sacred place, to pay tribute to the considerable blood shed here during the past battles.
Open hours: daily - 09:00 to 18:30
Admission: charge

Address: Piazza Farnese, Rome
Tel: +39 (0) 6 6860 1443
Located on the western side of the city centre and alongside the River Tiber, the Palazzo Farnese was designed and built in the early part of the 16th century, being expanded shortly afterwards and partly redesigned by Michelangelo. Whilst the exterior is quite imposing and eye-catching, it is the interior where the palace really exudes opulence, with endless frescoes and painted ceilings. The Carracci Gallery (Galleria Carracci) is amongst the most elaborately decorated rooms, with its ceiling showing the gods of Rome painted in a traditional baroque style. Although the Palazzo Farnese is not actually opened to the public, visits can be arranged by written request, by addressing a letter to 'Servizio Culturale dell'Ambasciata Francese'. 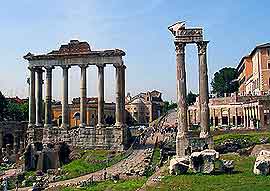 Address: Via Sacre, Rome
Tel: +39 (0) 6 69901 10
Constructed approximately 900 years ago, the Roman Forum once formed the very heart of the city, with this plaza being central to local politics and commerce. Surrounded by a number of important remains of government buildings, the Forum had many uses, ranging from public speaking to gladiator fights. As the Roman Empire began to fall, so did the structures making up the Foro Romano, which were subsequently excavated and partially restored from the 18th century onwards. It doesn't take much imagination to picture the Forum in its former glory, with many columns still standing today. Particular highlights include the Arch of Septimius Severus, the Basilica Aemilia, the Temple of Caesar, the Temple of Saturn and the Temple of Vesta, as well as the nearby palaces comprising the Palatino.

Address: Via della Domus Aurea, Rome
Tel: +39 (0) 6 481 5576
Located in front of the Parco di Traiano and just down the road from the Colosseum, the Domus Aurea originally served as the palace of famed Roman emperor Nero. This grand palatial complex was built between 64 AD and 68 AD, taking advantage of the open space created after the dwellings on the Palatine Hill were destroyed following the great fire of 64 AD. It is documented that many locals actually believed Nero started the fire himself, with the sole purpose of clearing space for his new palace. However, facing the likelihood of assassination following various rebellions and much hostility, Nero actually ended up taking his own life on the year that his beloved palace was completed.

Boasting no less than 300 rooms, this extraordinary landmark dominated the city and many Romans soon complained of its size and sheer extravagance. Nero's successors considered the Domus Aurea to be nothing short of an embarrassment and so stripped the rooms of their marble, filling in the site and building the Baths of Titus here, on one side. The palace was soon left forgotten, only to be rediscovered in the 15th century when a young boy fell through a hole in the hillside. After that, many Romans were carefully lowered into the palace to explore this labyrinth and its decorations, including the likes of both Michelangelo and Raphael.
Open hours: daily - 09:00 to 19:45, closed Tuesday
Admission: charge 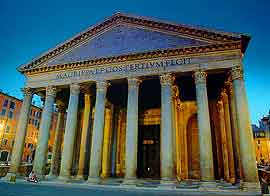 Address: Piazza della Rotonda, Rome
Tel: +39 (0) 6 6830 0230
An iconic landmark dedicated to the gods of ancient Rome, the centrally located Pantheon boasts a lengthy history, being originally built in 27 BC at the request of Roman statesman Marcus Vipsanius Agrippa, and then rebuilt following fire damage in 110 AD, during the rule of Emperor Hadrian. The Pantheon was completed in 126 AD and features a grand portico comprising a line of eight Corinthian columns, which fronts a large circular building, topped with a giant dome.
Open hours: daily, Monday to Saturday - 09:00 to 18:30, Sunday - 09:00 to 13:00
Admission: free