As a city with so much history and archaeology to share with its visitors, Rome is home to a number of commendable museums, packed with Roman and Greek treasures. With antique sculptures of bronze and marble representing the history of the city, and a fine collection of Greek and Etruscan vases, the Capitaline Museums are situated in the Piazza del Campidoglio and should not be overlooked.

Also in Rome is the Holy Angel Castle (Castel Sant' Angelo), a wonderful circular building situated between the River Tiber and the Vatican, boasting one of the most distinctive silhouettes of any building in the city. Other notable museums in Rome include the Palazzo Altemps, the Palazzo Venezia and the Villa Doria Pamphili, while for something a little more out of the blue, British tourists may like to pay a visit to the Keats-Shelley Museum, where the lives of English poets Percy Bysshe Shelley and John Keats (key figures in the Romantic movement) are celebrated in no small way.

Address: Piazza del Campidoglio 1, Rome, Italy
Tel: +39 (0) 6 6710 2071
This complex has collections based on those assembled by Pope Sixtus IV, one of the earliest great art collectors in the 15th century, and there are some of the finest and most celebrated sculptures of the ancient world. The Capitaline Museums include Palazzo dei Conservatori (Conservatories Palace), the Pinacoteca Capitolina, Museo Nuovo and Palazzo Nuovo. Recently restored, other features include 18th-century Roman tapestries, beautiful porcelains and paintings in the Pinacoteca Capitolina by: Caravaggio, Tiziano and Rubens.
Admission: charge 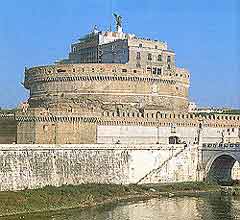 Address: Lungotevere Castello 50, San Pietro, Rome, Italy
Tel: +39 (0) 6 681 9111
The Castel Sant' Angelo was built in 135 AD as a tomb for Emperor Hadrian. With wonderful views from the terraces, the Holy Angel Castle got its name in the 6th century, when Pope Gregory the Great saw an angel appear above the building. It was widely believed that this signified the end of the plague that was currently spreading across the city. Over the years it has been a home, a fortress and even a medieval prison. The Vatican Palace was linked to the castle in 1277 by the Vatican Corridor, in order to give the Pope a possible means of escape during periods of political riots, wars and sieges. The castle is now home to a museum of antique weapons.
Open hours: daily - 09:00 to 21:00, Saturday 09:00 to 00:00
Admission: charge

Address: Piazza di Sant'Apollinare 44, Rome, Italy
Tel: +39 (0) 6 6833 759
This ancient turreted palace has a truly magnificent interior that is apparent as soon as you walk across the courtyard, which is full of statues, including a resting Hercules which was sculpted in the 5th century BC. In 1982 it was given to the state and later became a museum in 1997. The Palazzo Altemps now houses one of the most interesting collections of Roman sculpture in the city.
Open hours: daily - 09:00 to 21:00, Saturday 09:00 to 00:00
Admission: charge

Address: Via del Plebiscito 118, Rome, Italy
Tel: +39 (0) 6 6999 4318
Built for Venetian Cardinal Pietro Balbo, who later became Pope Paul II, the Palazzo Venezia now houses an eclectic collection of decorative objects, paintings, sculptures, a collection of Odescalchi weapons and some important and valuable gold objects. Features include a room that Mussolini once used as his office, great architecture and also a café, with views over the garden courtyard.
Open hours: daily - 09:00 to 14:00
Admission: charge

Address: Via Aurelia Antica 183, Rome, Italy
Tel: +39 (0) 6 3937 6616
The oldest residence in the area, the Villa Doria Pamphili is home to a collection of paintings, sculptures and pictures of the Doria Pamphil family. Of particular interest are the beautiful gardens and large greenhouses, dating back to the 19th century.
Open hours: daily - 10:00 to 13:30
Admission: charge