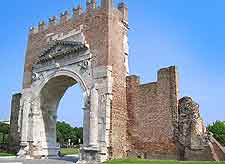 Rimini has been inhabited by the Greeks, the Gauls and the Romans, and later invaded by the Goths, the Byzantines and the Lombards. Each period of its dramatic history has left vestiges of the past on the city's streets and landmarks. Although much of Rimini suffered heavy bombing during World War Two, many of its ancient monuments and most important landmarks have survived relatively intact.

From castles and grand palaces, to Roman ruins and medieval buildings, a gentle stroll around Rimini makes for a pleasant afternoon. An especially famous landmark from many years ago is the Roman Amphitheatre, which was probably constructed in the 2nd century AD and may indeed have been one of the largest amphitheatres in the region, although sadly little remains of this structure today. 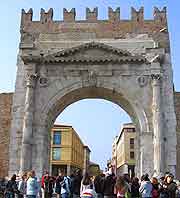 Address: Corso d'Augusto, Rimini, Italy, IT
Rimini's Roman 'Arch of Augustus' dates from 27 B.C. and is said to have been built in by order of the Roman Senate, to commemorate the repairs of the Flaminia Road in Italy.
Open hours: daily
Admission: free

Address: Piazza Malatesta, Rimini, Italy, IT
Tel: +39 0541 291 92
All that remains of Castel Sismondo today is a remnant of the fortifications that used to stand on Piazza Malatesta. Built by Sigismondo Pandolfo Malatesta in the 15th century, the castle was originally intended to be a huge fortified prison, complete with a moat and drawbridges. Today, its large square towers and stone walls are put to a very different use. The castle is now used mainly as a venue for cultural events.
Open hours: events / exhibitions only
Admission: charge

The huge, five-arched bridge spans the Marecchia River and is amongst Rimini's most distinctive landmarks, being one of a trio of Roman monuments. Construction work actually began under Augustus, but was only completed by Tiberius, hence its name. The Tiberius Bridge is immensely strong and seems to be remarkably resistant to flooding. Its aesthetic appeal has also become the subject of many paintings.
Open hours: daily
Admission: free 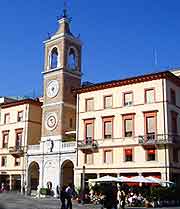 Address: Corso d'Augusto, Rimini, Italy, IT
At the heart of what used to be the Roman forum in Rimini is the Piazza Tre Martiri. This is the place where Caesar addressed his soldiers shortly before leading them on to conquer Rome - an event that is remembered in a stone monument within the actual square. Formerly known as Piazza Giulio Cesare and Piazza delle Erbe, the square was renamed to honour three young partisans from Rimini, who were executed during World War Two.
Open hours: daily
Admission: free

Address: Viale Roma / Via Bastioni Orientali, Rimini, Italy, IT
This Roman Amphitheatre is associated with some amazing architectural statistics. The landmark itself is thought to have comprised four concentric elliptical rings, measuring nearly 22 metres / 72 feet in thickness, while the arena was nearly 77 metres / 253 feet in length. It is also thought to have held in excess of 12,000 spectators. The amphitheatre suffered terrible damaged during the Second World War. Today, only a few remnants of this incredible Roman structure remain, including the main entrances and the arena walls.
Open hours: daily
Admission: free 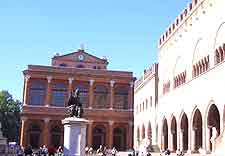 The Piazza Cavour is perhaps the best-known of the many public squares in Rimini and has become an important local landmark. It is also widely considered to be the most charming. The square itself features a fountain and statue of Pope V, while the buildings which surround the Piazza Cavour are some of finest in the whole city and include both the Palazzo dell'Arengo and the Palazzao del Podestá.
Open hours: daily
Admission: free 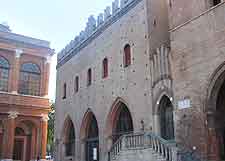 Address: Piazza Cavour, Rimini, Italy, IT
Although there has been a Palazzo del Podestà in Rimini since the 14th century, the building has been transformed considerably over the intervening years. The building that we see today is the largely the work of the architect, Gaspare Rastelli, who was commissioned to restore the building following an earthquake in 1916. The front façade of the palace has three Gothic arches. By all accounts, the middle arch was once used as a gallows. Today, the palace is put to a much less sinister use, serving as one of Rimini's many public exhibition spaces.
Open hours: daily
Admission: free 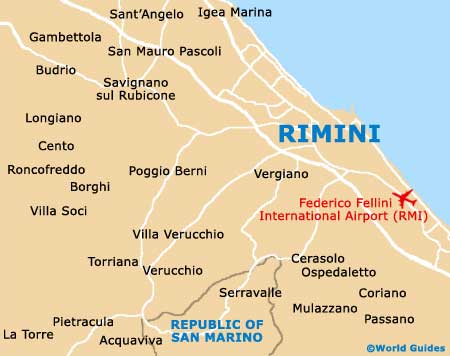