Getting Around, Naples Travel, Transport and Car Rental 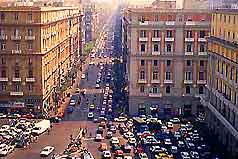 Naples is a relatively easy city to get around. The centre is fairly compact and most of the sights are within walking distance of one another.

Much of Naples is pedestrianised and there is an excellent bus network and local railway in the area. Alternatively, if you prefer to be driven around, there are plenty of taxis, although these can prove an expensive way to travel in the city.

Traffic in Naples is often heavy and driving in the city centre can be quite an experience, as Italian's tend to drive fast and can be somewhat impatient. Parking in the centre can also prove difficult. Although the city can become rather chaotic at peak times, a car provides a very convenient way to travel outside of the city centre. In Italy, people drive on the right-hand side of the road and overtake on the left. Many car rental agencies are available and there is a particularly good selection of these at Capodichino Airport.

Taxis in Naples are one of the most popular means of transport in the city, especially for business purposes, although they can prove an expensive way to travel. They can normally be found lined up at stands or on main squares and can also be called by phone. There may be some supplements, such as luggage or late night charges, that do not appear on the meter and so it may be useful to ask about these before leaving. Try to negotiate the taxi fare in advance if possible, to avoid overcharging. You should only use the official licensed taxis, which are clearly identified by the taxi sign on the roof and a numbered shield on the side.

In front of the central railway station in Naples (Stazione Centrale) at the Piazza Garibaldi is the main bus station. From here there are a number of popular routes that travel to all of the main towns and places of interest in the region. Many of these buses are run by the Naples Public Transport Board and other services are operated by SITA and also Curreri. Tickets should be purchased before you get on the bus or trams and they are sold at tobacconists, newsstands, some coffee shops and ticket machines and booths in train stations. They should be validated on the bus by punching them in the machine. Various travel passes are available which can prove a cost-effective way to travel.

Buses really come into their own on the Almafi coast, which is not served by rail and are by far the most enjoyable and scenic way to travel in this area. SITA services regularly travel between Salerno and Sorrento and the ATAC buses serve the Cilento coast from Salerno to Sapri. The Italian intercity bus system is excellent and will usually take you to most places, particularly those where trains do not travel.

Naples is served by a full range of trains; include Regionale, Diretto, Espresso, Intercity, Eurostar, and ETR450 fast trains. The city is a main rail hub for southern Italy and the city's largest and most important train station is the Stazione Centrale at the Piazza Garibaldi. Many trains that originate in the north pass through Rome and terminate here. From here there are both local and national lines that travel into the suburbs and down the coast to Sorrento and beyond, via Pompei and Herculaneum. Daily there are up to 30 trains that travel between Naples and Rome and the journey time is around 2.5 hours.

The state-run (FS) line provides a fast service between Naples and Salerno and for other coastal services there are local rail systems. Inland, train systems link to Caserta, Capua and Benevento from the city's main station, amongst other places. South of Salerno, Paestum and most of the main destinations on the coast of Cilento are served by the main rail route from Naples to Reggio di Calabria. For other coastal journeys, the Circumvesuviana is the most useful service; travelling around the Bay of Naples twice an hour from dawn until late at night and this is the best way to reach Pompei, Herculaneum and Sorrento.

If you are heading westwards you have a choice of the Naples underground of Netropolitana, which crosses the city centre and ends up at Pozzuoli-Solfatara, a 30 minute journey. Both the Ferrovia Cumana, which travels along the coastline, and the Circumflegrea (via Cumae) take you as far as Torregaveta.

Scooters are an excellent way to travel around the city and many locals use them to quickly reach their destinations, avoiding the long queues and traffic jams. There are several rental agencies in the city and riders are required to wear helmets by law.

Naples is home to a complex network of boats, ferries and hydrofoils run by many different companies, linking the city with the islands in the bay and also several further afield, such as Sardinia, Malta, Corsica, Sicily and other resorts along the coastline. Services for Capri, Sorrento, Ischia, Procida, Forio and Casamicciola depart from the Molo Beverello in front of the Castel Nuovo in Naples. Longer distance ferries depart from the Stazione Marittima, travelling to Palermo, Cagliari, Milazzo, the Aeolian Islands and Tunisia.