Established during the 6th century BC, Naples boasts an especially ancient history and is actually amongst the oldest cities on the planet to enjoy a continuous habitation. Many of its most historic landmarks are both impressive and well-preserved, including the likes of the San Francesco di Paola basilica, the Palazzo Gravina and the Palazzo Serra di Cassano.

The Royal Palace of Naples (Palazzo Reale) is especially notable and this grand landmark resides on the Piazza del Plebiscito, the city's principal plaza, where it is close to the 19th-century San Francisco de Paola church and the 18th-century Real Teatro di San Carlo theatre. This really is a must-see for tourists and most visitors are pleasantly surprised by what they find. The palace itself is beautiful, being filled with antiques and art, as well as some more contemporary installations and a beautiful formally landscaped garden. 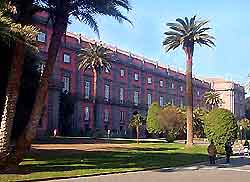 Address: Piazza del Plebiscito, Toledo, Naples, Italy
Tel: +39 (0)81 580 8111
This magnificent Royal Palace offers a real taster of the first-class architecture present within the city. Built at the turn of the 17th century, the palace has seen many alterations over the years, with extensive renovation work being required following a terrible fire in 1838, and again after the bombing damage of the Second World War. Many great nobles have called the Palazzo Reale their personal residence over the centuries, including the likes of French military leader Charles III, Duke of Bourbon. Look out for the huge double staircase next to the courtyard, which will lead you to the royal apartments. Specific onsite attractions include the Court Theatre, the Palatine Chapel, the art works and tapestries present within the museum, and the National Library (Biblioteca Nazionale), which has been a part of the complex since its arrival in 1925.
Open hours: Sunday to Tuesday and Thursday to Saturday 09:00 to 20:00
Admission: charge

Address: Via Biagio dei Librai 114, Spaccanapoli, Naples, Italy
Tel: +39 (0)81 551 7074
The Monte di Pietà was built at the beginning of the 16th century and was once a prominent charitable institution. Highlights include a grand courtyard, a sumptuous interior and a chapel - the Cappella della Pietà, which has many wonderful frescoes painted by Belisario Corenzio. This palace gives a real insight into how the wealthy locals once lived.
Open hours: Saturday - 09:00 to 19:00 and Sunday - 09:00 to 14:00 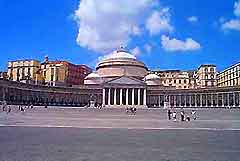 Address: Piazza del Plebiscito, Toledo, Naples, Italy
Tel: +39 (0)81 764 5133
Dedicated to St. Francis of Paola, this religious temple was actually inspired by the ancient architecture of the Pantheon in the city of Rome, with its portico and grand columns clearly offering more than a passing resemblance. Created in the early part of the 19th century after being commissioned by Ferdinand I, the San Francesco di Paola is an important basilica with an imposing neoclassical facade. Step inside and you will discover a valuable altarpiece with gold detailing and precious stones originating from the Church of the Santi Apostoli, which is no longer standing today.
Open hours: Monday to Saturday - 08:00 to 13:00 and 15:30 to 17:30, Sunday - 08:00 to 12:00

Address: Piazza San Gaetano, Spaccanapoli, Naples, Italy
Tel: +39 (0)81 296 944
Situated on the Piazza San Gaetano, in the heart of the city, is the Napoli Sotterranea - the Underground Naples. This is a fascinating series of underground tunnels, passageways and stairs, leading into a series of halls and rooms. The underground passageways of the Napoli Sotterranea were used by soldiers and troops in the 6th century and actually link Porta Capuana with the Palazzo Reale. Daily-guided tours are available, providing an insightful way to explore this interesting complex. Tours are available every day at 10:00, 12:00, 14:00 and 16:00.
Admission: charge

Address: Via Monteoliveto 3, Monteoliveto, Naples, Italy
This splendid Renaissance palace was constructed in 1513 for Ferdinando Orsini, the Duke of Gravina. The landmark has been extended several times over the years, with the addition of an enormous doorway in 1772 and a further storey that was added in 1839. It was badly damaged by fire in 1848, although has been well restored since. The Palazzo Gravina is now home to the modern School of Architecture (Scuola di Architettura).

Address: Via Monte di Dio 14-15, Pizzofalcone, Naples, Italy
Tel: +39 (0)81 245 2150
The Via Monte di Dio is one of the most sought after addresses in Naples and is full of many fabulous residences, of which the Palazzo Serra di Cassano is perhaps the grandest. This fine palace was once the home of Prince Aloisio Serra di Cassano and his family. The luxurious interior is full of extravagance, including many wonderful pieces of furniture and art. There is also an enormous double-flight staircase in the courtyard. The palace is now home to the Istituto Italiano per gli Studi Filosofici, which is an institute devoted to philosophy studies, offering many lectures and courses throughout the year.
Open hours: daily - 07:30 to 13:00 and 15:00 to 19:00, Saturday - 07:00 to 12:00