Located in southern Italy and close to the very heart of the country, Naples comes with many appealing surrounding attractions and hordes of tourists head off on excursions each day. Popular day trips include visits to the Catacombs of San Gennaro, the Solfatara Crater and the city of Pozzuoli, on the Phlegrean peninsula.

Many holiday makers also enjoy taking a cruise around the Bay of Naples, where Mount Vesuvius is an especially famous attraction. Although the volcano has quite a destructive reputation, it is actually relatively small, standing at only 1,270 metres / 4,200 feet in height. You may also like to pay a visit to the ancient city of Pompeii, learning about its fascinating past and the tragic day, roughly 2,000 years ago, when it was covered in literally metres of hot ash following the eruption of nearby Mount Vesuvius. 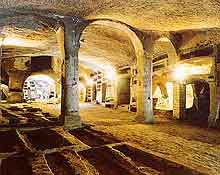 Address: Via Capodimonte 16, Naples, Italy
Tel: +39 (0)81 741 1071
These interesting catacombs located near to Naples are a mixture of corridors, tombs and arched chambers, supported by columns. The Catacombe di San Gennaro dates back almost 2,000 years, with notable points of interest including ancient mosaics and early frescoes. It is also believed that San Gennaro was buried in these catacombs.
Open hours: daily
Admission: charge 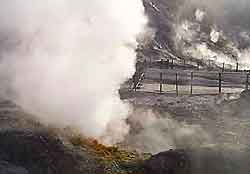 Address: West of Naples, Italy
Known as the Forum Vulcani in Roman times, Solfatara is a large crater of a collapsed volcano, with many bubbling mud pits, sulphur gas vents and steam jets. The Solfatara Crater is a layer of rock that is supported by the pressure of steam underneath and the ground feels hot and strangely hollow. Dangerous areas are fenced off and guides are sometimes able to lead visitors around these areas, at certain times of the day. Scientists regularly monitor the huge plug of cooled lava that lies underneath the whole area. This is one of the most popular attractions on the Campanian coast and is easy to reach by bus, or alternatively the crater is a 25-minute walk uphill from the Pozzuoli train station.
Open hours: daily - 08:30 to 19:00
Admission: charge 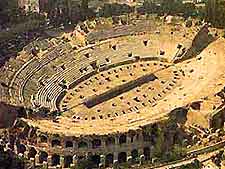 Pozzuoli and the Phlegraean Fields

Address: West of Naples, Italy
Pozzuoli is located to the west of Naples and is a small city with some interesting Roman ruins. It is also the hometown of famous movie star Sophia Loren. Pozzuoli was the main port of Italy and the Senate once seriously considered digging a 257-km / 160-mile canal to connect it to Rome and make shipping easier. There is a splendid amphitheatre on the Via Domiziana, which is open daily and well worth a visit. In Roman days it was the third largest amphitheatre in the whole Roman Empire and over the years many shows have been performed on its historic stage. Also of interest is the ancient Serapeum, an unusually grand marketplace, which was once believed to be a temple to the Egyptian god Serapis. 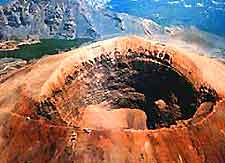 Address: East of Naples, Italy
The residents of nearby Pompeii, Herculaneum and Stabiae did not even realise that Mount Vesuvius was a volcano, until it erupted and caused much destruction in 79 AD. The actual eruption did not include much lava, although there was a considerable amount of mud, cinders and ash. Herculaneum was buried under mud, whilst Pompeii and Stabiae vanished under black ash. Most of Italy was also coated with a thin layer of dust following the eruption.

Today, the rich volcanic soil grows grapes and olives in abundance and the area around the volcano has become one of the most densely populated in Italy. Mount Vesuvius was last heard from in 1944, when a small eruption left visible lava flows and sealed the main fissure, stopping the permanent smoke that was once a familiar sight.

Address: East of Naples, Italy
The friendly town of Pompeii (modern Pompei is now spelt with one 'i') was once a fair-sized city by Roman standards, with a population of some 20,000. Founded in the 7th century BC, the city came under the power of the Romans in around 200 BC and was a lively, busy city. In the fateful year of 79 AD, Pompeii was buried under stones and ash when Mount Vesuvius erupted and after much looting, the city was soon forgotten about.

Many of the city's inhabitants had left when the volcano began rumbling and only around ten percent of the population perished in this natural disaster. In the 1600s, engineers discovered the ruins when digging an aqueduct and detailed excavations started in 1748. Magnitudes of artefacts were dug up and these have proved invaluable to archaeologists who are trying to learn more about Roman life. There are many sights worth seeing in modern Pompei, including the Antiquarium - with countless wonderful works of art, the Forum - affording excellent views of Vesuvius, and the Macellum - a market decorated with frescoes. In 1980, Pompei suffered much damage after a severe earthquake and the city took many years to recover. There is a Vesuvian Museum on Via Colle San Bartolomeo, which is full of interesting information about the famous volcano.