There are an enormous number of beautiful churches in Naples and most are in absolutely superb condition. 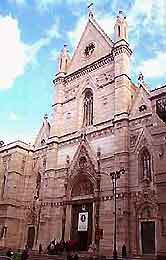 Address: Via Duomo 147, Spaccanapoli, Naples, Italy
Tel: +39 (0)81 449 097
The simply vast Duomo di San Gennaro is the city's cathedral and is without doubt one of the most stunning buildings in the whole of Naples. Built on the ancient site of a previous cathedral dating back to 570 AD (Cattedrale Stefania), the Duomo di San Gennaro in Naples stands next to the Basilica di Santa Restituta, which was constructed in the 4th century. Over the years the Duomo has been both restored and redesigned, particularly after much of it was destroyed by a large earthquake in 1456. Notable features include a gilt wooden ceiling (1621), golden roundels painted above the pillars depicting various saints, the Cappella del Tesoro di San Gennaro (Chapel of the Treasure of San Gennaro) built between 1608 and 1637 and many spectacular statues and frescoes. In 1620, the artist Domenichino was commissioned to paint many of the frescoes and had to paint under armed guard to protect him from jealous local artists. He died in 1641 after suspected poisoning, before he had completed his work. The committee refused to use a Neapolitan painter after this suspicious death and the dome was completed by the Roman Giovanni Lanfranco.
Open hours: daily - 09:00 to 12:00 and 16:30 to 18:30
Admission: charge

Address: Via Francesco di Sanctis 19, Spaccanapoli, Naples, Italy
Tel: +39 (0)81 551 8470
This grand masterpiece is the funerary chapel of the Sangro di Sansevero princes, who were renowned military leaders from a famous family. Naples' Sansevero Chapel was begun in 1590 by Giovan Francesco di Sangro and updated between 1749 and 1770 by his descendant Raimondo di Sangro, who is responsible for its present appearance. The Sansevero family contains six saints and they are portrayed inside the chapel. Highlights include a wonderful marble-inlay floor, the painted ceiling 'Glory of Paradise' which was commissioned in 1749, and many detailed statues and sculptures, such as Giuseppe Sammartino's famous 'Veiled Christ' (1753), which is situated in the centre of the chapel and is one of the most famous sculptures in Naples.
Open hours: Easter to September, Monday and Wednesday to Saturday - 10:00 to 16:40 and Sunday - 10:00 to 13:00
October to Easter, Monday and Wednesday to Saturday - 10:00 to 18:40
Admission: charge 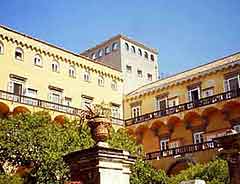 Address: Piazzetta San Gregorio Armeno 1, Spaccanapoli, Naples, Italy
Tel: +39 (0)81 5520186
The San Gregorio Armeno is one of the oldest convents in Naples and is of great importance. This was a convent of great wealth and the nuns who once lived here enjoyed a comfortable life, with countless sumptuous banquets. With many interesting features, such as candlelit shrines, detailed wooden ceilings, famous frescoes by Luca Giordano, well-preserved 18th-century interiors and a wonderful organ, this picturesque church affords a spectacular view of the Bay of Naples.
Open hours: daily - 08:30 to 12:00

Address: Via Duomo 147, Spaccanapoli, Naples, Italy
Tel: +39 (0)81 449 097
At more than 1,700 years old, the Cappella di Santa Restituta is the oldest church is Naples, and one of the oldest in the whole of Italy. Christian emperor Constantine ordered the construction of this ancient church and it was built on the site of a temple to Apollo. Highlights include the Baptistery of San Giovanni in Fonte, with an octagonal dome built in the 5th century, impressive early Christian mosaics and also an underground archaeological area.
Open hours: daily - 09:00 to 12:00 and 16:30 to 18:30
Admission: charge

Address: Museo Nazionale di San Martino, Largo San Martino, Vomero, Naples, Italy
Tel: +39 (0)81 578 1769
This monastery resembles a stately palace and is full of grandeur, both inside and out. Construction started in 1325 under the royal patronage of Charles of Anjou and the building has been updated several times over the years. The Certosa di San Martino in Naples has a breathtaking view of the entire city and the majority of the monastery is now a museum with many splendid paintings, frescoes, a scale model of the monastery dating back to the 18th century and also the renown gouaches of Vesuvius by Dalbono, in various angry poses. There are also some 18th-century floors made with majolica tiles and beautiful terraced gardens, with many mature plants and flowers. Also worth seeing is the Quarto del Priore (the prior's apartment) - the residence of the only monk who had contact with the world outside of the monastery - which is incredibly luxurious, and the nearby Sezione Presepiale, with the best collection of nativity crèches in the world.
Open hours: Tuesday to Sunday - 08:30 to 19:00 (some rooms are closed in the afternoon)
Admission: charge

Address: Piazza del Gesù Nuovo, Spaccanapoli, Naples, Italy
Tel: +39 (0)81 551 8613
This magnificent Neapolitan Baroque church was constructed between 1584 and 1601 and stands proudly in the centre of the Piazza del Gesù Nuovo. The striking facade is reminiscent of Renaissance palaces and the church also features a large dome, which over the years has been rebuilt twice due to major earthquake damage. Points of notable interest include the highly detailed interior decoration, which was completed in the 18th century taking almost 50 years, many superb frescoes by leading Italian painters such as Francesco Solimena, a gallery of portraits and numerous beautiful statues and sculptures.
Open hours: Monday to Saturday - 06:30 to 12:45 and 16:15 to 19:30, Sunday - 06:30 to 13:30

Address: Via Duomo 142, Spaccanapoli, Naples, Italy
Tel: +39 (0)81 449139
The Girolamini was built between 1592 and 1619 by Giovanni Antonio Dosio, an architect from Florence. At the end of the 18th century the large dome and facade were reconstructed in a neoclassical style, adding to the beauty of this church. In the Second World War the church was badly damaged by bombing and has undergone much renovation since. Interesting features include the 1684 fresco by Luca Giordano, which is situated on the inside of the entrance, and wonderful cloisters built in 1600.
Open hours: daily - 09:30 to 12:50

Address: Via Tribunali 253, Spaccanapoli, Naples, Italy
Tel: +39 (0)81 446944
The striking octagonal Pio Monte Della Misericordia church in Spaccanapoli was built in 1601 by a charitable institution. Situated near to Naples' Duomo, the original church was soon considered too small and was actually destroyed in 1655 to make way for the new, larger church, which was built between 1658 and 1678. There are many beautiful paintings, some dating back to the early 17th century, including Caravaggio's altarpiece, which has influenced many Italian artists over the years.
Open hours: Monday to Saturday - 09:00 to 13:00

Address: Via San Giovanni a Carbonara 5, Decumano Maggiore, Naples, Italy
Tel: +39 (0)81 295873
This peaceful church is mixture of wonderful Renaissance architecture and sculpture of the highest quality. Located just outside the Capuana Gate of the old city walls, the San Giovanni a Carbonara dates back to the mid-14th century when it was constructed to honour John the Baptist. This church is of great historic value in Naples and inside there are a dramatic staircase, magnificent statues and many splendid sculptures. The church has been altered many times over the years and has recently been restored to its original state, thanks to a conservation scheme in Naples.
Open hours: Monday to Saturday - 09:30 to 13:00

Address: Piazza San Giuseppe dei Ruffi 2, Spaccanapoli, Naples, Italy
This late 17th-century was built by Dionisio Lazzari and it is located near to the Duomo in Naples. The Baroque exterior of the building is one of the most impressive in the city. However, the interior, although initially looking like expensive marble is actually a clever, realistic paint effect as real marble proved too expensive at the time of construction. The San Giuseppe dei Ruffi is an interesting church to visit, particularly when the choir of nuns are singing.
Open hours: Monday to Saturday - 07:30 to 13:00 and 16:00 to 18:00, Sunday - 07:30 to 10:30

Address: Via Benedetto Croce, Spaccanapoli, Naples, Italy
Tel: +39 (0)81 552 6209
The Santa Chiara in Naples, located opposite the Gesù Nuovo, is the leading monument of Angevin Gothic in Naples. Built between 1310 and 1328, this ancient church has undergone many changes over the years. In the Second World War, much bombing destroyed many of the original frescoes that once covered the interior of the church. Highlights include a vast rectangular hall, a restored 18th-century marble floor, beautiful tombs of notable Italians - including some sculpted by Giovanni and Pacio Bertini of Florence in the mid 1300s, and the Chiostro delle Clarisse, Naples' most famous cloister.
Open hours: daily - 07:00 to 12:30 and 16:30 to 18:30
Cloister, Monday to Saturday - 09:30 to 13:00 and 14:30 to 17:30, Sunday 09:30 to 13:00
Admission: charge