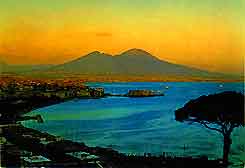 Known in Italian as the Aeroporto Internazionale di Napoli, Naples International Airport lies within the north-easterly suburb of Capodichino, being close to San Pietro a Patierno and next to the Ramo Capodichino. The airport is just 7 km / 4 miles from the city centre and is connected by the Calata Capodichino, the Piazza Giuseppe Garibaldi and the Corso Umberto I.

Naples International Airport has its origins within World War I, when it was heavily used by the military forces. Today, annual passenger numbers are close to six million, with more than 60,000 flights each year using the single runway.

Operated by Azienda Napoletana Mobilità (ANM), frequent buses travel to and from the airport from the Napoli Centrale railway station and the port of Naples (the Piazza Municipio), departing roughly four times an hour throughout the day. Tickets are available for purchase at the Sunstore shop based within the Arrivals area.

There are also Alibus shuttle buses that travel to and from the central railway station, the Piazza Municipio and the Piazza Garibaldi, running every 30 minutes. Tickets for these shuttles can be purchased as you board the bus.

Cars can be readily hired at the airport, with the best prices tending to be secured when booked ahead of arrival. The drive into the city centre follows the A56 / Tangenziale (bypass) road and this journey should take in the region of ten minutes. From the airport, it is even possible to drive all the way to Rome (to the north-west) in around two hours, via the A1 'Motorway of the Sun' (the Autostrada del Sole).

There are usually a number of authorised taxis based directly outside of the arrivals concourse, offering an easy way to travel to your hotel. Fixed rates are in use for the main destinations within the city limits, such as the city centre itself, the port of Molo Beverello, and Mergellina, where you can catch a hydrofoil and sail to the island of Capri, as well as the Ischia Islands.