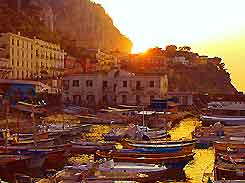 Campania offers a number of annual festivals, public holidays and cultural events to entertain its plentiful visitors, starting with Chamber Music at the Teatro delle Palme off the Via dei Mille, on the south-western side of central Naples.

Music lovers will find plenty of further concerts staged all through the year at venues such as the Royal Palace, the San Carlo Opera House (Teatro di San Carlo), the Teatro Mercadante, the Teatro Trianon and the Teatro Mediterraneo, the latter of which is located at the Overseas Fair Grounds.

Further things to do in Naples include various religious festivals, summer parades and ceremonial feasts, with many local events being centred around the Piazza Plebiscito, which serves as the city's biggest public venue and regularly plays host to live music, processions and rallies, as well as New Year's Eve fireworks. The Piazza Plebiscito is to be found alongside the Royal Palace, while additional open-air events take place at the Communal Gardens.


For concerts, shows and other cultural events, Naples always has plenty to offer. The best information on programmes and times can be found in the local newspapers, in particular 'Il Mattino' and also in the free monthly guide 'Qui Napoli'. The Neapolis Rock Festival attracts many top international acts and is held in midsummer. Located to the west of Naples, near to the beach at Arenile di Bagnoli, this lively event is very popular.