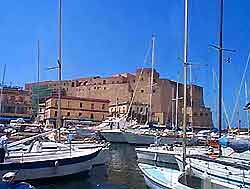 In Naples, many locals either choose to participate in sports or watch from the sidelines, as a spectator. Football is hugely popular in Italy and Naples comes with two sizeable stadiums - the Stadio Arturo Collana (capacity of 12,000) and the Stadio San Paolo (capacity of 60,000).

Of course, many keep-fit fanatics holidaying in the city will be looking for somewhere to go jogging. Next to the Piazza Vittoria, the Villa Comunale Park is a reliable bet for joggers and comes with a series of trails, as well as a rollerskating rink and sea views. Elsewhere, you may like to play a game of tennis, enjoy a round of golf, sail along the coastline or play volleyball on the beach.

Tel: +39 (0)81 239 5623
Football is a real passion amongst southern Italians and Naples is no exception. Serie A is the equivalent of the premiership and consists of 18 teams. The big Serie A team is Napoli, with many well-known and highly regarded players. The legendary Maradonna was once a member of this team before his fall from grace. In Naples, the main football ground is the Stadio di San Paolo in Fuorigrotta, a western suburb.

Italians enjoy the sport of cycling and there are a handful of bicycle rental shops in the city. Those who choose to hire a bike for the day or week will find plenty of appealing coastal routes.

Golf is a popular sport in southern Italy and there are a series of golf courses around the city of Naples, both with nine and 18 holes, all offering extensive facilities and distant views. Pozzuoli, a modest little city around 10 km / 6 miles from Naples, has a particularly good course.

Naples has many tennis courts and players often find that it is best to book ahead by phone. Popular public courts can be found on Via Giochi del Mediterraneo and also at Forio d'Ischia on the island of Ischia. Many of the more expensive hotels also have courts and non-residents are usually able to use them by arrangement with either the hotel or the tourist information office.

There are many freshwater lakes and streams in and around Naples, often being heavily stocked and ideal for fresh water fishing. To fish in fresh water you need to purchase a year's membership card from the Federazione Italiana della Pesca Sportiva, which has an office in every province. Sea fishing is possible from the shores, from boats and even underwater, and is allowed almost everywhere without a permit.

Many types of water sport are available in the Bay of Naples and popular water sports include windsurfing, waterskiing, canoeing, swimming and scuba diving. The Isle of Capri is one of the best locations for these activities and has some of the cleanest water in the bay. It is also possible to take submarine trips around the island.

There are facilities for sailing at almost all of the nearby islands around Naples and it is possible to bring your own boat to Italy for six months without any paperwork - if you transport it by car. The main bay at Naples has yacht harbours in Posillipo, while further harbours and marinas can be found at Capri, Procida, Porto, Casamicciola, Lacco Ameno and Forio d'Ischia - on the island of Ischia. At most resorts it is possible to hire boats and equipment.

Many of the beaches around the Bay of Naples are flat and understandably very popular with summer holiday makers. Local beaches tend to be made up of grey volcanic sand, and those that are free and relatively small do tend to fill up quickly, soon becoming crowded.

To make the most of your holiday, you will usually have to pay a small fee to access the top resorts. Then you can soak up the sun on some of the finest local beaches, where the sand is often imported. For the most attractive beaches around Naples, choose between those of Capri, Minori, Positano and Procida (all roughly an hour away), or perhaps take a trip along the stunning Almafi coast.