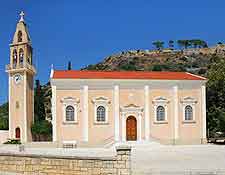 Making a pleasant alternative to the beaches on Kefalonia is the island's rather surprising and extensive selection of museums. Archaeology, folk art and history are amongst the topics covered within Kefalonia's museums and galleries, a number of which are based within Argostoli or close by.

One of the most visited of all the museums on Kefalonia, the Archaeological Museum of Argostoli contains a wealth of well displays island artefacts, relics and Mycenaean finds. Also in Argostoli is the Corgialenion Historical and Folk Art Museum, which features extensive archives and collections of a historical nature.

Address: Rokou Vergoti, Argostoli, Kefalonia, Greece, GR
Tel: +30 26710 28300
The various exhibits within the Archaeological Museum of Argostoli date as far back as prehistoric times and even include a number of Roman items. Of particular interest is the very valuable Mycenaean 'kylix', a conical cup from the 12th century BC, which was unearthed at the Lakkithra cemetery.
Open hours: Tuesday to Sunday - 08:30 to 15:00
Admission: charge

Address: Davgata, Kefalonia, Greece, GR
Tel: +30 26710 84400
The Natural History Museum is located in the village of Davgata and is just 5 km / 4 miles from Argostoli. The main attractions include displays relating to the island's geology and natural phenomena, with some fascinating displays about the island's flora and fauna, as well as information about the neighbouring Ionian island of Ithaca. The topographical model of Kefalonia stands out and shows the island in relief.
Open hours: daily - 09:00 to 15:00
Admission: charge

Address: Ilia Zervou 12, Argostoli, Kefalonia, Greece, GR
Tel: +30 26710 28835
Located within the Corgialenion Library, Argostoli's Korgialenio History and Folklore Museum provides an insight into island life before the 1953 earthquake. Exhibits concentrate on various different aspects, such as the economy and politics during the various periods, including the British, French and Turkish periods. The archives include a number of important document and personal artefacts, as well as photographs, maps, tools, books and costumes, showing the clothes that we worn on Kefalonia from the 16th century onwards.
Open hours: Monday to Saturday - 09:00 to 14:00
Admission: charge

Iakovatios Library and Museum of Kefalonia

Address: Lixouri, Kefalonia, Greece, GR
Not to be missed is the Iakovatios Library and Museum of Kefalonia, which is located within a historical pre-earthquake mansion that once belonged to the island's very wealth and influential family of Typaldi-Iakovatios. Visitors will be able to wander around and explore a total of 14 different rooms, which between them contain some 20,000 different books, a number of which are both old and very valuable, such as the book entitled 'The Complete Works of Hippocrates', which was published as far back as the latter part of the 16th century.
Open hours: hours vary
Admission: charge

Address: Vallianou, Argostoli, Kefalonia, Greece, GR
Tel: +30 26710 26595
Home to an array of Kefalonian history, the Focas Kosmetatos Foundation truly delves into the world of the nobility. There is much here to allow you to learn more about the history of Argostoli and important events of the past.
Open hours: Monday to Saturday - 09:30 to 13:00, 19:00 to 22:00
Admission: charge

Address: Lithostrotou, Argostoli, Kefalonia, Greece, GR
The Divisione Acqui Museum may be small and in fact takes up just one room, but it does contain some very interesting and slightly disturbing information relating to the history of the Italian 'Acqui Division', when they occupied the island, before they were killed by Germans. Easy to find and worth looking out for, the Divisione Acqui is situated on the left-hand side of Argostoli's catholic church.
Open hours: hours vary
Admission: free