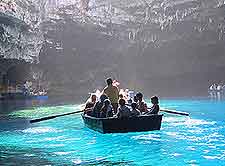 The various landmarks of Kefalonia are spread all over the island and range from fortresses and ancient monuments, to natural caves and valleys. Something quite different to the various ancient landmarks around Kefalonia, Melissani Cave is home to a vast sea water lake, which is famous for its intense blue colour.

The Acropolis of Sami lies on the eastern shore of Kefalonia and is amongst the area's most important archaeological landmarks. Other extremely noteworthy structures include the Roman Villa in Skala, Assos Castle in Patricata, and St. George Castle, which located just 8 km / 5 miles to the south of Argostoli. 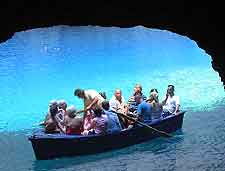 Address: Sami, Kefalonia, Greece, GR
The Melissani Cave is located around 2.5 km / 1.5 miles to the west of Sami and best viewed between noon at 14:00, when the sun its overhead and at its strongest. Interesting, Melissani Cave itself was only discovered after part of its roof collapsed during Kefalonia's 1953 earthquake and if it wasn't for this seismic activity, this 30-metre / 100-foot lake would remain completely hidden and this landmark would be quite unknown today. Visitors can enjoy a boat ride around the cave and explore the various stalactites and geological formations close-up.
Open hours: daily - 08:00 to 20:00
Admission: charge, includes boat trip

Address: Sami, Kefalonia, Greece, GR
Tel: +30 26740 22950
Drogarai Cave is one of the most breathtaking of the island's natural landmarks and this enormous chamber has long been of interest to holiday makers visiting Kefalonia. The illuminated cavern is more than two million years ago and contains large numbers of stalagmites and stalactites, which remain intact and quite impressive. Each year, various seasonal events and concerts are held at Drogarai Cave, due to the cavern's exceptional acoustics.
Open hours: daily - 08:00 to 20:00
Admission: charge 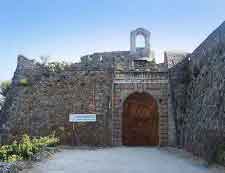 Address: Patricata, Kefalonia, Greece, GR
Assos Castle is perhaps the island's premier landmark and this important fortress is now listed as a European Heritage Site. Enjoying a scenic and elevated setting, Assos Castle is close to the village of Patricata and just over 35 km / 22 miles to the north of Argostoli. Not only is this the biggest castle on Kefalonia, but one of the largest that Greece has to offer, so it really should not be missed. You can easily spend half a day here, explore its long walls, bastions and stone tunnels. If you come here in the height of the day and need to quickly cool down, then you can always head to nearby Myrtos Beach for a quick dip in the sea.
Open hours: daily
Admission: free

Address: Skala, Kefalonia, Greece, GR
Situated on the very outskirts of Skala and on the far southern side of the island, the Roman Villa remains are well worth exploring if you are in the area. Expect to find some extremely well preserved mosaic floors and other items of archaeological interest. Excavations within this part of the island are frequent and often uncover many Roman treasures from the past, which are usually displayed in the Archaeological Museum of Argostoli.
Open hours: daily
Admission: free

Address: Sami, Kefalonia, Greece, GR
Dating as far back as the year 500 BC, the Acropolis of Sami can be reached by a series of scenic trails, which also connect a number of neighbouring Roman remains, unusual geological attractions, olive groves and beaches. It is well worth coming to the Acropolis landmark for the views of the Gulf of Sami alone. Antisamos Beach is to be found relatively close by if you feel withdrawal symptoms from the beachfronts.
Open hours: daily
Admission: free

Address: Livatho Valley, Kefalonia, Greece, GR
St. George Castle is to be found within the scenic Livatho Valley area and is known to have been built more than 1,600 years ago, during Roman times. It was during this period than Kefalonia was being continually ravaged by pirates and so this fortress serves as an elevated lookout and a means of defence, taking its name from the Church of Saint George, which was also once sited here. The suburb built directly in front of St. George Castle soon become known as the 'Kastro'.
Open hours: daily
Admission: free

Address: Paliki Peninsula, Kefalonia, Greece, GR
Rising high above the sea and once famous for its natural and rhythmical rocking motion, the Kounopetra soon earned it name as the 'Moving Rock' or 'Rocking Rock' However, this unusual geological phenomenon came to an abrupt halt following the earthquake of 1953, which stabilised the very base of the Kounopetra. Today, the rock remains completely motionless, but remains an important landmark, due to its history and past movements.
Open hours: daily - 24 hours
Admission: free