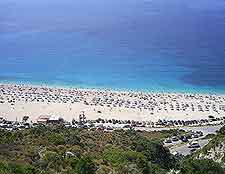 Home to some of the most beautiful Greek beaches imaginable, many of the beaches on Kefalonia are surrounding by steep cliff faces and gorgeous crystal-clear waters. Local coastal resorts have even been awarded the RU Blue Flag, for their good facilities and overall cleanliness, both the sands and water quality.

Myrtos Beach lies directly north of Argostoli and boasts fine white sandy, turquoise water and a backdrop of rocky cliffs. With snack bars, sun loungers and gorgeous views, Myrtos should be at the top of everyone's itinerary and for holiday makers on Kefalonia, really is simply one not to miss. Other exceptional beaches on Kefalonia include Kaminia, Pessada and also Xi Beach, the latter of which is known for its water sports.


Many tourists holidaying on the island choose to hire a boat for the day and cruise around the coastline of Kefalonia. If you have the time, do consider doing this, since it is often the only way to reach some of the most secluded of beaches, which often remain virtually deserted, even in the height of the busy summer season. 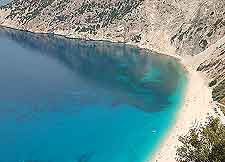