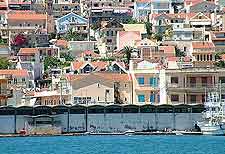 Apart from the glorious coastline of Kefalonia, there are plenty of further tourist attractions for visitors to see, experience and enjoy.

The biggest town on the whole of Kefalonia and located on the south-western coast, Argostoli is a very lively spot and central to much of the island's action, being home to many quality attractions.

Visitors will also find plenty to see within the villages and resorts of Assos, Fiskardo and Sami, which each have something quite different to offer in the way of tourist attractions.

Many holiday makers on Kefalonia also like to sightsee whilst enjoying a leisurely glass-bottom cruise, taking a hike through the countryside. Alternatively, why not visit one of the many locations featured in the blockbuster movie, Captain Corelli's Mandolin. 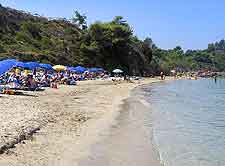 Many of the most historic Venetian buildings in Argostoli were sadly destroyed during the 1953 earthquake and the town of today has a much more modern feel.

The main attractions are based around Argostoli's central plaza, the Plateia Valianou, and come in the form of shops, cafes, restaurants, bars and museums, which are often shades by large tropical palm trees. Other hubs include the pedestrianised Lithostrotou and the waterfront streets. 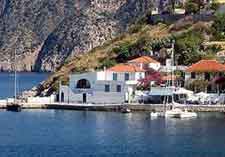 The tiny village of Assos is crammed full of whitewashed buildings and houses, giving it an unmistakable character and charm. Assos enjoys a scenic setting alongside a peninsula, next to an imposing Venetian fortress.

Those looking for something different to the endless beach attractions of Kefalonia should give a trip to Assos serious consideration, where you can enjoy and leisurely afternoon hike, some superb vistas and an appealing historical ambiance, which is simply not to be missed. 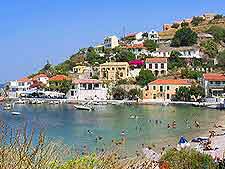 The village of Fiskardo is steeped in history and was the only village on the whole of Kefalonia to remain completely intact and untouched after the 1953 earthquake.

Fiskardo lies on the far northern coast on the island and is a popular haunt for yachts. In recent years, some ancient remains were discovered here. 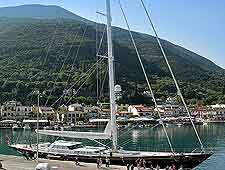 Sami and the Surrounding Area

The resort village of Sami lies on the eastern coast of Kefalonia and around 25 km / 16 miles to the north-east of Argostoli. Sami features a long strip flanked with busy coffee shops, although if you look beyond its highly developed tourism industry there are some very beautiful hillsides and natural attractions, based around its bay.

Particular highlights include a number of monasteries, some remains of an ancient fortress, walking trails, several beaches and even some surprisingly large caves. 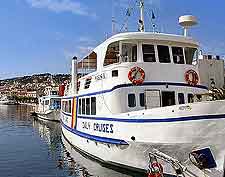 A number of highly recommended boat trips and excursions are extremely popular with tourists holidaying on Kefalonia.

The attractions on the neighbouring island of Ithaci (Ithaca) are easily reached by boat, while others prefer a leisurely cruise onboard the glass-bottom boats run by Captain Makis, which allow you to not only see the coastline, but what lies beneath the surfaces of the beautifully clear water.

As you cruise around the island, it is quite likely that you will encounter some rather inquisitive dolphins.
Open hours: seasonal variations
Admission: charge, discounts for children

Around the island are a number of stables, which offer horse riding along the mountain trails, passing through the remains of some past villages and allow you to reach attractions that you would likely otherwise miss. Horse riding through the mountains comes highly recommended and is a great way to escape from the summer crowds.

On the way, look out for vineyards, mountain goats and even the occasional eagle, soaring high overhead.
Open hours: seasonal variations
Admission: charge 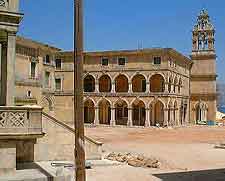 During the latter part of the 1990s, the island of Kefalonia gained a surge of new interest, since it was the setting for this now famous story, set during the Second World War. Due to the great success that the novel received, it was soon made into a blockbuster movie, and true to form, Kefalonia featured heavily in the film, with many scenic views, attractions and locations being chosen, particularly around Sami and Argostoli.

In particular, Sami was used extensively, since its buildings are more historic. Fans of Captain Corelli's Mandolin often come to Kefalonia to search out the film locations alone.