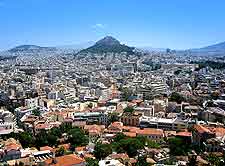 Being so close to some of Greece's most famous attractions, it is understandable the visitors basing themselves in Piraeus will choose to venture outside of the city and around the Attica region. Athens is quite literally just up the road from Piraeus and home to some quite remarkable attractions, both old and new.

Those from ancient Greece certainly knew how to choose a location for a temple and this is clearly apparent should you choose to visit Cape Sounion and its superb 5th-century attractions. Also close to Piraeus at the destinations of Dafni, Elefsina, Marathon, Mount Parnitha, Peania and Vravrona, each of which have something special to offer day trippers. 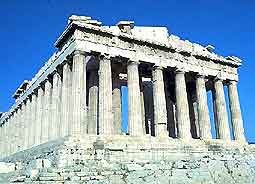 Being so close to the endless selection of ancient landmarks in Athens, tourists staying in Piraeus simply must not miss out on spending time visiting these major attractions, many of which are known the world over. Athens is located just 10 km / 6 miles to the north-east of Piraeus and its main sights tend to be just a relatively short walk away from Syntagma Square (Plateia Syntagmatos). The most famous attractions in Athens include the Acropolis, Hadrian's Arch, the National Historical Museum, the Temple of Olympian Zeus, the Theatre of Dionysos, and the extremely family orientated Attica Zoological Park. 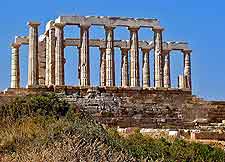 Sited some 70 km / 43 miles to the south of Athens, Cape Sounion's number one attraction is its Temple of Poseidon, which enjoys a breathtaking situation, atop a craggy rock face overlooking the sea. Built almost 1,600 years ago, the Temple of Poseidon is white and truly stands out when viewed by the sea, gleaming brightly. On a fine day, the views from the temple itself and quite outstanding and you can see as far as Kythnos, Peloponnese and Serifos.

Lying around 10 km / 6 miles to the north-west of Athens and directly north of Piraeus, Dafni is home to one of the most important Byzantine monuments within the Attica region, the Dafni Monastery. Dating as far back as the 11th century, the Dafni Monastery is now a World Heritage site, although sadly is was badly damaged in the 1999 earthquake. Interestingly, the monastery is stands directly on the former site of the Sanctuary of Apollo, which was destroyed some 1,600 years ago, although one single column does still remain standing within the church, near to some awesome mosaics. 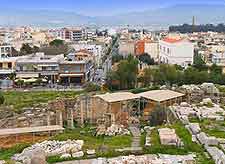 Tourists planning to sightsee outside of Piraeus should not miss the attractions within nearby Elefsina, which is located just over 20 km / 12 miles to the west of Athens. Also today Elefsina is a fairly industrial town, with a number of large factories and imposing oil refineries, the ruins of Ancient Elefsina remain today and offer a true insight into the Mycenaean period. The museum helps visitors to make a little more sense of the ruins, which were actually based around the Sanctuary of Demeter. 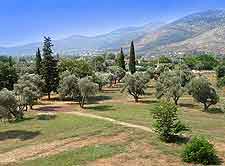 Marathon may be a fairly unremarkable Greek town some 40 km / 25 miles to the north-east of Athens and a similar distance from Piraeus, but is very famous for its ancient battle of 490 BC. The Battle of Marathon say a Greek army of 9,000 defeat a much the much larger 25,000-strong army from Persia, when a runner was sent to Athens to tell of the victory, sadly collapsing and dying after his 42-km / 26-mile run, which is the origin of the marathon race today. The main attractions here lie around the town itself and include the famous Marathon Tomb, the vast lake Marathon (once the only water supply to Athens), the sandy beach of Shinias, and the remains of the ancient port of Ramnous. 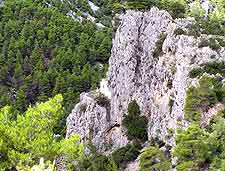 Mount Parnitha is well-known for its National Park and this vast space head become a popular retreat for locals from Athens looking to escape city life for the weekend. Close to Piraeus, the Mount Parnitha National Park tragically suffered much fire damage in 2007, although there is still plenty to see and recreational attractions to enjoy. Apart from Mount Parnitha itself, there are a number of smaller mountain peaks, such as Karavola, which is still high enough to be capped by snow in the winter. The best way to reach the resort is to head to Thrakomakedones, a suburb of Athens, and then enjoy a very scenic cable car ride.

There are a couple of outstanding attractions in Peania which are often explored by day trippers from Piraeus. The Koutouki Cave is one of them and this spectacular cavern is more than two million years old and amongst the most outstanding in the whole of Greece. Tourists can expect to find some huge stalagmites and stalactites, with the guided tour ending with a fun light and sound show. The other attraction of note in Peania is the Vorrs Museum. where a large collection of contemporary and folk art is displayed. 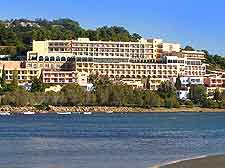 Vravrona is conveniently close to the airport and also to a very nice beachfront, alongside to the Gulf of Marathon, although most tourists tend to come here to visit the Sanctuary of Artemis. This ancient temples is one of a number of Neolithic monuments and its museum contains many important relics. Vravrona is best reached by a combination of metro, bus and taxi.