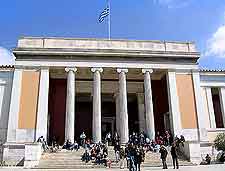 Being so close to Athens, the few museums and galleries within Piraeus cannot help but be somewhat overshadowed by their counterparts in this Greek capital. That said, Piraeus does contain a number of museums which are well worth spending time exploring.

The highly recommended Piraeus Archaeological Museum is a good place to while away an afternoon and is extremely well organised. Inside visitors will discover a wealth of exhibits and artefacts, which date back to classical and even Roman times.

Address: Harilaou Trikoupi 31, Piraeus, Greece, GR
Tel: +30 21045 21598
Of particular interest are some very impressive and well-preserved tombs from as far back as the 4th century BC, along with the extremely famous statue of Apollo. Also known as the Piraeus Kouros, the Apollo statue was sculpted in bronze around 2,500 years ago and is actually hollow. This priceless Greek statue was discovered as recently as 1959, literally covered in rubble. Other noteworthy bronzes on display here include include the statues of both Artemis and Athena.
Open hours: Tuesday to Sunday - 08:30 to 15:00
Admission: charge, concessions 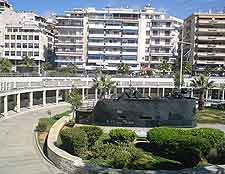 Address: Akti Themistokleous, Plateia Freatidas, Zea Marina, Piraeus, Greece, GR
Tel: +30 21045 16264
The Hellenic Maritime Museum can be found within the Marina Zeas building and celebrates the Greek maritime history, being home to many fascinating scale models of both historical and modern-day ships. There are also a number of detailed seascapes on exhibit here, along with guns, photographs, maps and even a part of an actual submarine, which is just waiting to be explored. Other exhibits include some fascinating documents relating to historic of naval traditions in both Piraeus and throughout Greece, as well as some items which were once onboard the yacht of Aristotle Onassis and some intricate models carved by prisoners, who had nothing else to use other than bone.
Open hours: Tuesday to Saturday - 09:00 to 14:00, Sunday - 09:30 to 14:00
Admission: charge, concessions

Museum of the Electric Railway (ISAP)

Address: Metro Station, Piraeus, Greece, GR
Much more than just something for train buffs, the Museum of the Electric Railway celebrates the past 150 years of history relating to the arrival of the train and the city's very own overground light railway. This popular route connected Piraeus with Kifissia, and the collection has been created over the past 20 years or so, with invaluable contributions by dedicated Greek railway staff, both past and present. You can expect to find various photographs and objects not only relating to trains powered by electricity, but also the much earlier steam trains, which transported passengers along this stretch from 1869 until 1904.
Open hours: Tuesday to Saturday, seasonal variations
Admission: charge