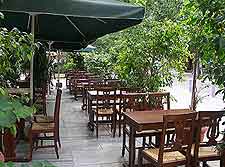 The city of Piraeus is home to literally dozens of good dining opportunities, which comprises cafes, fast-food eateries and Greek style tavernas and restaurants. Breakfasts tend not to be a big thing with Greeks in general, and those visiting Piraeus will often find themselves enjoying nothing more than a coffee and a simply pastry.

Restaurants in Piraeus tend to serve lunch a little later than you may be familiar with, offering dining between the hours of 13:00 and 15:00. Dining is also often quite late and Greeks don't generally consider dining out until as late as 21:00. However, if you are finding yourself a little hungry between restaurant meals, there are plenty of street vendors littering the streets of Piraeus, selling everything from custard-filled pastries (bougasta) and cheese pies (tyropitta), to sandwiches (sandouits) and spinach pies (spanakopitta). 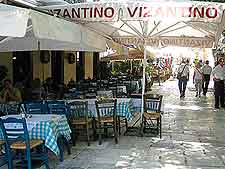 If has to be said that whilst the dining scene in Piraeus is more than adequate, the selection of restaurants in the neighbouring city of Athens is far superior and being the capital, not surprisingly the best in Greece.

If you are planning to eat out in Piraeus, then there are a large number of fairly reliable restaurants and eateries lining the waterfront at the Great Harbour. 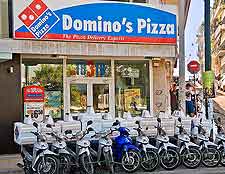 However, if you head to the city's back streets or slightly farther from the action, at Mikrolimano and the Marina Zea, then a better quality of restaurant will be found.

Also in Piraeus, a number of highly recommended dining venues are spread along the waterfront promenade at Freatida, close to the city centre.