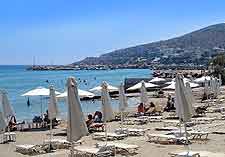 There are a number of excellent beaches scattered around the city of Piraeus, all of which are managed by the Greek National Tourist Organisation. Beach facilities are good and often include changing areas, cafes and even pitches for volley ball, although there is usually a charge for entry onto the beaches, since many are private.

There is a good beach located alongside the Piraeus Peninsula, where sightseers may also be interested in the remains of the city's ancient walls, indicating the former grandeur of this ancient city. Apart from the beaches around the city, Piraeus is also home to some charming marinas and harbours, particularly along the Koumoundourou coastline.


Piraeus beaches have something in common with many in Greece, with traditional Greek taverns never being far from hand and usually specialising in freshly caught fish, which is often both tasty and very affordable. There are often also modern cafes and small small shops close by.