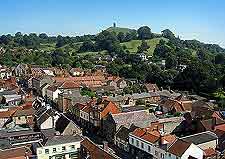 A small Somerset town with a friendly village appearance, Glastonbury is a surprisingly appealing tourist destination and actively welcomes visitors, promoting tourism wherever possible. Glastonbury is famous for its strong Christian connections, as well as its New Age pagan culture, spiritual beliefs, mythological stories, and of course, its epic annual Glasto pop festival.

Legend dictates that a young Jesus Christ once stayed in Glastonbury, together with Joseph of Arimathea, his great uncle. It is also said that the town serves as the burial place of both King Arthur and his wife, Guinevere. Whatever you decide to see and explore, the town's Tourist Information Office is worth finding and stands on the High Street, within the characterful Tribunal building. 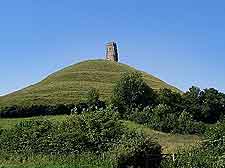 A good way to get to know Glastonbury is by taking a stroll along the highly recommended Millennium Walk and enjoy the various sights on offer. The Millennium Walk is very much aimed at tourists and passes attractions such as St. Benedict's Church, the bustling Market Place, and also the George and Pilgrims Inn. Even those tourists who are not religious will still likely be interested to see the acclaimed Glastonbury Thorn Tree, which is said to be sprouted from Arimathea's hawthorn cane. Other notable tourist attractions include the Peat Moors Centre and its reconstructed Iron Age houses, and also the Chalice Well, where waters with 'magical' healing properties have been used for more than 800 years. More information about Glastonbury Tourist Attractions. 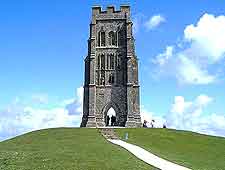 There are three main landmarks in this town which reliably draw the biggest crowds of tourists each summer. Located in the very centre of the town, the ruins of Glastonbury Abbey are still very impressive and this former monastery has strong connections with King Arthur and Guinevere, as well as the Holy Grail. Also known as the Isle of Avalon, Glastonbury Tor stands on the outskirts of the town and this eye-catching hill is topped by the remains of the Church of St. Michael, which can be reached by a steep pathway. Finally, the Glastonbury Market Cross celebrates the town's medieval past and stands on the High Street. More information about Glastonbury Landmarks and Monuments. 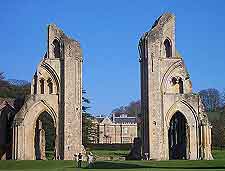 There are several museums of note to be found in the Glastonbury area, with the Somerset Rural Life Museum being amongst the best and offering an insight into Victorian farming. Situated within the late 15th-century Tribunal building, the Lake Village Museum is brimming with Iron-Age information and relics found locally, and is managed by the English Heritage, while the Museum of Pagan Heritage on St. John's Square may also be of interest to tourists. Close by and in Sparkford, the Haynes Motor Museum is a must for car buffs and is home to more than 400 different vehicles, which include everything from vintage Rolls Royces to modern-day sports cars. More information about Glastonbury Museums. 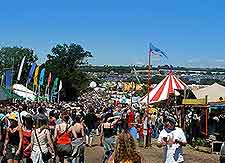 The county of Somerset is cram-packed with leading sights and tourist attractions, and so those based in Glastonbury should carefully consider the day trips that present themselves. It is quite possible to drive to either the Georgian city of Bath or the bustling city of Bristol. Alternatively, Cheddar Gorge, the Exmoor National Park, Frome, Salisbury, Taunton and Wells are all within easy reach of Glastonbury. Shoppers will likely head next door to Street and its retail centre known as the 'Clarks Village'. Those who prefer beaches may enjoy an excursion to Bournemouth, Poole, Weymouth or Weston Super Mare. More information about Glastonbury Attractions Nearby.