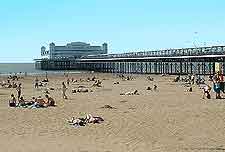 A relatively plain stretch of seafront until the early 19th century, when the town of Weston Super Mare was transformed into a popular seaside resort and tourist hotspot, in an attempt to attract residents from nearby towns and cities, such as Bristol. Weston Super Mare has never been more popular and tourism here makes up a big part of its annual income, with a plethora of prominent tourist attractions based around its huge expanse of beachfront. Often known simply as 'Weston', the tidal range here is huge and peaks at almost 15 metres / 50 feet, which makes it the second largest of its kind on the planet.

Also famous for being home to the family of the late television presenter, Jill Dando, who is remembered in the beautifully landscaped 'Jill's Garden' in the scenic Grove Park, Weston Super Mare's main stretch of beach is lined with a long and wide promenade. The town has a typical seaside atmosphere with fish and chip shops, amusements, two piers and a host of gift shops, but beneath the surface, there is much more to this part of North Somerset than first meets the eye. Be sure to pay a visit to the Weston Super Mare Tourist Information Centre at the Centre Beach Lawns, to ensure that you make the most of your visit. Leaflets and booklets about Weston's main tourist attractions and hotels are available here, together with plenty of tourism advice, and information about the main sights in neighbouring towns and villages. 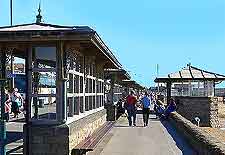 Weston Super Mare's main tourist attractions include its glorious beachfront - comprising two enormous sandy beaches, lined by a major promenade, complete with brightly coloured land train, donkey rides and a paddling pool; SeaQuarium - standing on its own individual pier, full of aquatic displays and fish from all around the world; amusements - numerous amusement arcades scattered all around the centre of Weston Super Mare and home to much more than just slot machines; and AMF Bowling - a busy tenpin bowling centre with fully computerised lanes and video games. More information about Weston Super Mare Tourist Attractions. 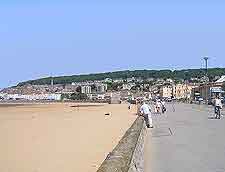 Prominent landmarks in central Weston Super Mare include the Grand Pier - without doubt one of Weston Super Mare's most spectacular Victorian-style structures, featuring a large pavilion at the end, housing a mini funfair; Playhouse Theatre - hosting a range of shows, live music and comedy events each year, comfortably seating around 700 people; and the Winter Gardens - a seafront entertainment venue known for its classical architecture and grand facade. More information about Weston Super Mare Landmarks.

Perhaps not known for its cultural tourist attractions, Weston Super Mare does in fact contain a number of rather surprising museums, such as the Helicopter Museum - believed to house the largest collection of helicopters in the whole world, together with a range of memorabilia and exhibitions; and the North Somerset Museum - Weston's local history museum, with information about the town's days of yesteryear, including reconstructions of period houses and shops. More information about Weston Super Mare Museums and Art Galleries.

Tourist attractions and locations just a relatively short distance from Weston Super Mare include Bristol - a large city featuring an excellent shopping centre, a bustling harbour area with many waterfront attractions, such as the Watershed venue and the SS Great Britain; Clevedon - a small town on the north-eastern side of Weston Super Mare and offering an elevated, winding cliff top walk with breathtaking views; Portishead - a lively town boasting stylish Victorian terraces and recently renovated docklands, lined with many trendy eateries and bars; and Cheddar - home to much more than just its famous cheese, life in this village is centred around tourism and its spectacular gorge and caves, the largest stone valley in the country. More information about Weston Super Mare Attractions Nearby.