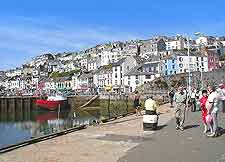 The natural harbour known as Torbay has long been a leading destination for family summer holidays, being affectionately referred to as the English Riviera Geopark. Torbay is a spreading region, encompassing the towns of Torquay, Paignton and Brixham, and is at its busiest in July and August, when the innumerable beaches fill up with sun-seekers.

In Torquay, some of the most popular beaches include Babbacombe, Maidencombe and Oddicombe, while in Paignton, it is Broadsands, Goodrington Sands, Preston Sands and Paignton Beach itself that stand out and greatly contribute to Torbay's thriving tourism industry. Torquay was in fact once the actual base for the prestigious 1948 Summer Olympics water sports, and today the coastline continues to be used for both national and international events.

When you first arrive in Torbay, you have a choice of tourist information centres to choose between. These are located on the Vaughan Parade in Torquay, on Paignton's Esplanade, and at the Old Market House in Brixham. 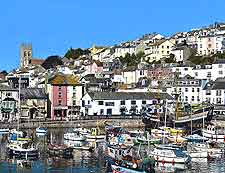 Torquay, Paignton and Brixham all offer plenty in the way of holiday accommodation, with literally hundreds of B&Bs and guest houses spread around these towns and along the neighbouring Devon coastline. During the summer months, Torbay becomes especially busy, when Torquay holiday cottages and similar self-catering options are in demand. Alternatively, a handful of luxury hotels are available around these towns. Those who are big fans of Agatha Christie may like to stay at the Barcelo Torquay Imperial Hotel or the Grand Hotel, both of which were favourite haunts of this world-famous novelist. More information about Torbay Hotels and Accommodation.

The hottest, sunniest days in Torbay and invariably beach time, or lend themselves to a day out at the Splashdown at Quaywest water park. If you decide to take a break from the sun and sand, or the day is a little overcast, then there are a huge number of tourist attractions to choose between. You may like to enjoy a trip along the heritage Dartmouth Steam Railway, spend time at the Living Coasts zoo at Torquay, or at Paignton Zoo, before heading to the miniature world that is Babbacombe Model Village, or take a ride onboard the historic Babbacombe Cliff Railway. For evening entertainment in Torbay, the Princess Theatre in Torquay is the area's biggest and features regular performances and concerts. More information about Torbay Tourist Attractions. 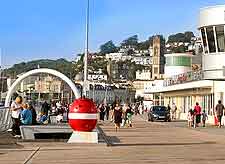 Paignton Pier is one of the most famous landmarks in Torbay and this Victorian promenade dates back to 1879. However, the attractions of the pier are quite different to its early days and now include seaside amusements and fairground rides. Away from the beachfront, other important local structures in Paignton include Compton Castle, Kirkham House and the palatial Oldway Mansion, which was sold to Paignton Urban District Council in 1946 with the strict proviso that it was properly maintained and opened to the general public. In Torquay, look out for Cockington Court and Country Park, Kents Cavern and Torre Abbey. Next to Brixham, the village of Galmpton is where you will discover the National Trust's Greenway Estate, which was the home of famous local crime writer, Agatha Christie, for almost 40 years. More information about Torbay Landmarks and Monuments. 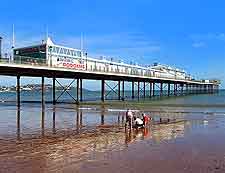 Other good alternatives to the beaches of Torbay's are the town's cultural museums, which are packed with local information and memorabilia. The Brixham Heritage Museum is amongst the best and celebrates the rich maritime heritage of Torbay, with exhibits relating to the regular summer sailing regattas, past lifeboat rescues and the days when local smugglers frequented this coastal stretch. Nearby and on the harbourfront is the Golden Hind Museum Ship, which is a magnet for summer tourists who board this authentic replica ship to learn more about the voyages of Sir Francis Drake. At the Torquay Museum the exhibits are a little more random and range from Agatha Christie first-edition books to valuable artefacts from Egypt. More information about Torbay Museums. 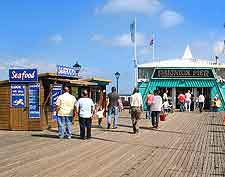 If you have your own car, then the whole of Devon really is just a relatively short drive away. It is quite possible to travel between the south and north coasts in under two hours, passing by the Dartmoor National Park and the Exmoor National Park en route. Close to hand are the seaside resorts of Teignmouth, Dawlish and Exmouth, and further to the north-east, Seaton, Sidmouth and Lyme Regis. Directly north of Torbay is the cathedral city of Exeter, home of the Crealy Great Adventure Park, Rougemont Castle, the Royal Albert Memorial Museum and Art Gallery (RAMM), and also a very lively quayside. Directly to the west is Plymouth, where the National Marine Aquarium is undoubtedly the star of the show, being accompanied by a healthy array of restaurants in the Barbican and Hoe area. More information about Torbay Attractions Nearby. 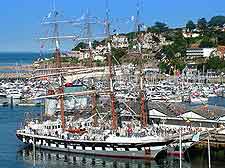 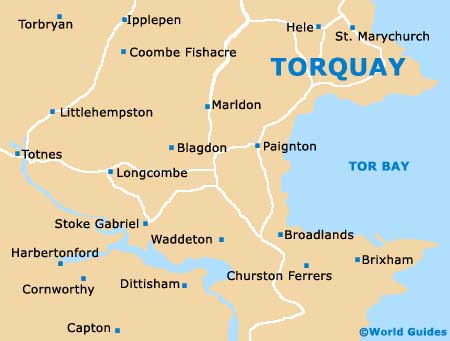