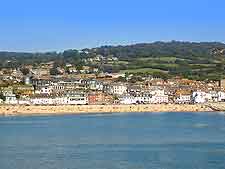 An unspoiled and exceedingly charming seaside town nestled in between some towering limestone cliffs, Lyme Regis features an extensive beachfront and is perfect for a family summer holiday. However, Lyme Regis is not overly commercialised or filled with tourism, and manages to retain something of a tasteful and understated character, without appearing elitist in any way.

Although during the summer weekends, Lyme Regis can become fairly busy, in most parts the town remains relatively peaceful and is far from crowded. The Cobb is quite a landmark on the harbourfront and marks the border of Dorset and Devon.

Next to the Cobb and the Undercliff, Monmouth Beach boasts truly world-class fossil hunting and prehistoric geology, where some of England's very first dinosaurs were discovered. Also nearby, Marine Parade leads to Bridge Street, where the Lyme Regis Tourist Information outlet is to be found, next to the Marine Theatre. 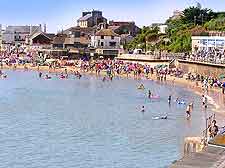 The Lyme Regis beaches range from fine imported sand, to pebbles and large rocks, where it is usually quite easy to spot giant ammonite fossils literally lying on the beachfront. Tourists looking for further attractions around the coastline of Lyme Regis may like to visit the Seafront Gardens or the Marine Aquarium, which resides on the Cobb. The town is also known for its footpaths and coastal trails, which are perfect for keen walkers and boast gorgeous views across Lyme Bay and beyond. On the outskirts of the town, the Lyme Bay Winery in nearby Axminster is a good place to visit if you fancy sampling some traditional 'scrumpy' cider. More information about Lyme Regis Tourist Attractions. 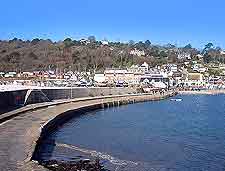 Without question the Cobb is one of the principal manmade structures in Lyme Regis, made even more famous by Jane Austen and also Meryl Streep, who walked along the Cobb when the classic movie 'The French Lieutenant's Woman' was filmed on location here, using many locals as film extras. The town was also a favourite holiday destination of Beatrix Potter and is said to have inspired a number of her storybook illustrations. However, there are still further landmarks of note within the town of Lyme Regis, such as the extremely historic Town Mill, the Lepers Well and St. Michael's Church, all of which have very interesting stories to tell. More information about Lyme Regis Landmarks and Monuments. 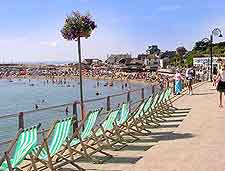 The Lyme Regis Philpot Museum on Bridge Street is one attraction not to miss and stands in the heart of the town, on Bridge Street. Celebrating the life of acclaimed fossil hunter and 19th-century paleontologist Mary Anning, the Philpot Museum is brimming with fossils and also provides fascinating information about the town's smuggling scene in the 18th century. Coombe Street is where you will discover the Dinosaurland Fossil Museum of Lyme Regis, which contains an impressive fossil collection and comes complete with an impressive skeleton of a dolphin-like marine reptile ichthyosaur, which lived in the waters here more than 200 million years ago. For a taste of Dorset art, do consider visiting the Mermaid Gallery and Shop on Church Street. More information about Lyme Regis Museums and Lyme Regis Art Galleries. 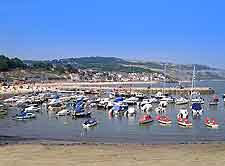 The southern coast of England is a perfect base for tourists to stay and close to Lyme Regis are a huge quantity of day trips to choose between - far too many for just one holiday. If you have a car, then you can easily drive from Lyme Regis to the noteworthy carpet museum at Axminster, or to Chard, where both the Forde Abbey and the Cricket St. Thomas Lakes and Gardens await visitors. Abbotsbury, Crewkerne and Dorchester are also close by, along with the university city of Exeter, the religious town of Glastonbury, and the popular Devon town of Seaton, which is known for its shingle beach and restored narrow gauge tramway. More information about Lyme Regis Attractions Nearby. 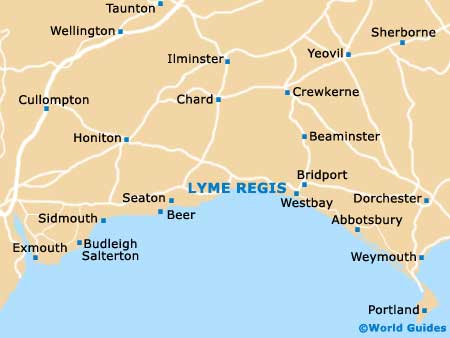