Exeter and the Dartmoor National Park 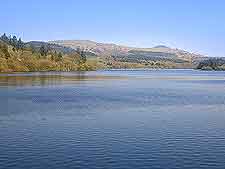 Flowering heather and prickly gorse bushes make up the majority of the ground cover in the park, with only a handful of hawthorn and other native trees breaking up much of this barren landscape. There are a handful of oak woodlands based in the valleys and coombes, while the lowlands of the Dartmoor National Park tend to be more marshy, with large reservoirs and dams. 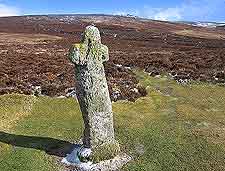 Those lucky enough to explore the Dartmoor National Park will likely spot grazing sheep and ponies, the latter of which are semi-wild and particularly famous. You will also discover some striking rocky hills, outcrops and pillars (tors), which are extremely photogenic and distinctive. One of the most recognisable of these structures is named the Vixen Tor and measures 30 metres / 98 feet, being shaped by erosions and the hand of nature.

Dartmoor is a huge Devon attraction and earned its name after the River Dart, which actually originates within the park. On the south-easterly side of the park are a handful of thatched villages, where there are some wonderful historic churches, built with the wealth generated by local quarrying and tin mining. 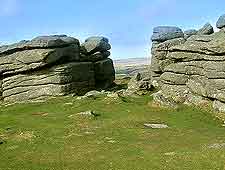 The Dartmoor National Park is a superb walking country, with excellent walking trails being based around Chagford, Haytor, Okehampton, Postbridge and Princetown. Other significant settlements and destinations in the park include Ashburton, Buckfastleigh, Christow, Horrabridge, Moretonhampstead and South Brent.

Within the national park of Dartmoor is a huge quantity of attractions worth searching out. The most impressive of these include the Bowerman's Nose rocky formation at Hayne Down, the Brent Tor on the northern side of Tavistock, the country house of Castle Drogo near Drewsteignton and Crazywell Pool on the southern side of Princetown. 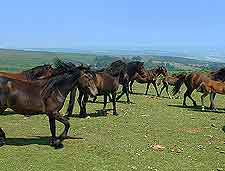 Also look out for the prehistoric Grey Wethers stone circles of Postbridge, the remains of a Bronze Age settlement at Grimspound, the much-photographed Hay Tor at Haytor Vale, and Lydford Gorge, where both the famed 'Devil's Cauldron' and the 'White Lady Waterfall' are situated. Fans of the BBC TV's Doctor Who series may like to pay a visit to the Hound Tor, between Widecombe-in-the-Moor and Bovey Tracey, which was used as a location for a 1975 episode with 'Sontaran' aliens.

The tourist hotspot of Dartmeet is one of the most visited places within the Dartmoor National Park. Another popular destination is High Willhays, which at more than 620 metres / 2,035 feet above sea level, is amongst the highest points in England.