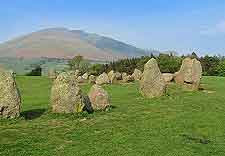 There has been human settlement in the Lake District for at least 5,000 years. During the Neolithic era, people began to set up home in clearings here, shaping stone into axes. Langdale Pike is known to have been a particularly good source. More settlements sprang up during the Bronze Age.

The Romans arrived in the Lake District around 100 AD, although little evidence survives of their frontier existence. It's not until the 10th century and the arrival of the Vikings that we start to see more proof of settlements, including Norse place names and stone monuments. 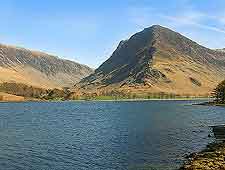 The Lakes in Medieval Times

In the dying days of the 11th century, the Normans arrived. Deer parks, monasteries, field systems, markets and villages sprang up all over the region, evidence of which can still be seen today.

From the 14th century onwards, an increase in population in the Lake District meant that even more land was needed to graze livestock and grow crops. Land on the fellside started to be used and many towers or 'pele' houses were built to protect against raids on farms.

By the beginning of the 18th century, the enclosure of land in the Lake District had become commonplace. Indeed, landowners could apply to enclose land by Act of Parliament. Walls were built around fields and areas of fellside, and many smaller farms were incorporated into larger estates. 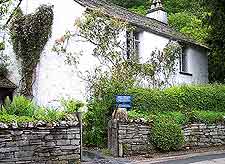 An Era of Tourism

In the late 18th century, a small number of visitors to the Lake District discovered its beauty and charm, and quickly spread the word. It quickly became popular and many guides were produced by the likes of Daniel Defoe. By the 1840s, what had been a trickle of visitors rose to a torrent.

It was at this time that the history of the Lake District also became closely associated with that of English writers and poets. The best known was the poet William Wordsworth, who spent much of his life amidst the mountains and lakes of this area, including Hawkshead, Grasmere and Rydal Mount. Children's book writer Beatrix Potter visited here as a child and later bought a number of farms, including Hill Top Farm in which she lived.

During the early 20th century, the growth in tourism in the Lake District grew steadily, particularly with the advent of the motor car. To prevent commercial or industrial exploitation of the area, in 1951 the Lake District was named as a National Park. Indeed, it is one of the largest in Britain. Later, the country house of Brockhole was purchased and turned into the park's very first visitor centre. Alfred Wainwright's popular pictorial guide, first published between 1952 and 1965, drew even more hikers to the region.

In the 1960s, the Lake District was at the centre of an attempt to beat the world water speed record. The attempt ended in tragedy with the death of Donald Campbell in the 'Bluebird' on Lake Coniston.

Today, tourism remains very much a part of everyday life in the Lake District. The summer months see holiday makers arrive in their droves, visiting to enjoy the endless hiking trails, beautiful lakes and other tempting attractions, including those of Ambleside, Bowness, Grasmere, Keswick, Ullswater and Windermere.