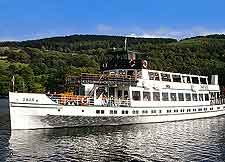 Although hiking in the Lake District is one of the region's main draw cards, there are many further tourist attractions located within the area, which come in the form of charismatic towns and pretty lakeside villages. Much visited within the Lake District are Ambleside, Grasmere, Hawkshead, Keswick, Langdale and also Ullswater, each of which features their very own set of attractions and sights to see.

Lake Windermere is actually the biggest lake in the whole of England and one of the leading Lake District attractions, stretching for just over 16 km / 10 miles in length. Windermere is also amongst the country's most popular lakes and is regularly bustling with sailing boats during the summer months. 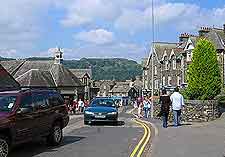 Address: Ambleside, Lake District, England, UK
Ambleside is a charming Lake District town, where some of the best walking trails and climbing routes await tourists. The plentiful cobblestone streets of Ambleside are lined with B&Bs and tea shops, together with plenty of surprisingly large outdoor equipment specialists, around Compston Road. Ambleside is to be found on the Windermere cruise route and is always a good place to stay.
Open hours: daily
Admission: free 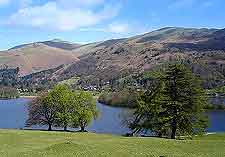 Address: Grasmere, Lake District, England, UK
Grasmere village is an extremely picturesque part of the Lake District in which to base yourself and this peaceful lake is backed by lush scenery and seemingly endless countryside walking trails. Positively ancient, the Grasmere of today is generally made up of cottages and buildings from the 19th and 20th centuries. It is in Grasmere where famous poet William Wordsworth and his wife Mary are buried, at St. Oswald's Church. A number of attractions celebrate Grasmere's connections with Wordsworth, including his former residence, Dove Cottage.
Open hours: daily
Admission: free 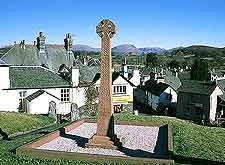 Address: Hawkshead, Lake District, England, UK
Hawkshead is a particularly quaint Lake District village and resides within the South Lakeland area, comprising the hamlets of both Outgate and Hawkshead Hill. There are many attractions spread around the Hawkshead area, ranging from period cottages and white-washed buildings, to cobbled alleys, countryside vistas, outdoor clothing shops and an interesting medieval wool industry heritage. Hawkshead is where tourists will find the acclaimed Beatrix Potter Gallery and its original watercolour paintings, while the Grizedale Forest is close by, between Esthwaite Water and Coniston Water.
Open hours: daily
Admission: free 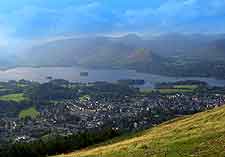 Address: Keswick, Lake District, England, UK
Bordered by scenic mountains and fells, Keswick is a historical market town with plenty of tourist attractions, and is the busiest northerly location in the Lake District. Keswick is brimming with B&Bs, gift shops and cafes serving traditional English cream teas, and lies alongside Derwent Water and its five islands. Known for its past graphite mining, Keswick now actively promotes seasonal tourism, with boat trips on Derwent Water being especially popular. Other notable attractions include the Pencil Museum at Southy Works, the Castlerigg Stone Circle, and the waterfront views from Ashness Bridge.
Open hours: daily
Admission: free 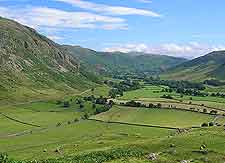 Address: Langdale, Lake District, England, UK
The gentle green undulations of Langdale are backed by some rather dramatic mountain peaks, offering some of the finest walking trails that you are likely to find in England. Attractions worth mentioning include the Dungeon Ghyll, Elterwater Lake and the Langdale Pikes, all of which feature a selection of traditional English pubs and inns. Skelwith Bridge leads towards the Great Langdale Valley, where the views truly are something very special indeed.
Open hours: daily
Admission: free 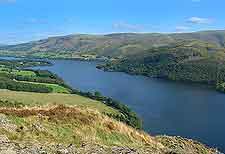 Address: Ullswater, Lake District, England, UK
The silvery lake of Ullswater is located on the north-easterly side of the Lake District and although this is actually the region's second-largest lake, it is considerably quieter than many. However, the western side of Ullswater can become a little busy during the peak summer season, along the A592 road. Attractions include the hamlets of Glenridding, Patterdale, and Pooling Bridge, while Penrith is particularly close by. Steamboats offer the ultimate way to explore Lake Ullswater and have been run by the Ullswater Steamers for more than 150 years, sailing between Glenridding and Pooley Bridge, via Howtown.
Open hours: daily
Admission: free 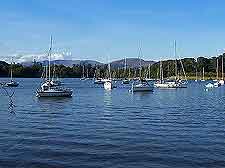 Address: Windermere and Bowness, Lake District, England, UK
The towns of both Windermere and Bowness almost seem to merge and have grown up around the lake, following the arrival of the railway line in the mid-19th century, and serve as top tourist destinations in the Lake District. Within the two towns are a plethora of beautiful Victorian houses and attractions, with some of the best eateries being based close to the scenic Bowness Pier.
Open hours: daily
Admission: free