Getting Around, Bristol Travel, Transport and Car Rental 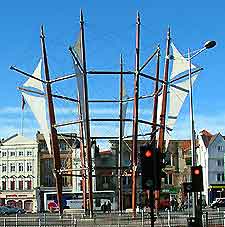 The city of Bristol is well served by public transport system and has a large bus station and a major station train, with excellent connections throughout England. Bristol is situated nearby many other towns, cities and tourist attractions. Many visitors also travel outside of the city, and renting a car is often the best method of transport, with a number of major roads and motorways situated close by.

The city is served by a number of airports, the closest and most convenient of which is Bristol Airport (BRS). London Airports, including London Heathrow Airport (LHR), London Gatwick Airport (LGW), London Stansted Airport (STN) and London City Airport (LCY) are also within easy travelling distance of Bath, by either train, coach or car.

The district of Bristol is served by a many major roads and nearby the city connects to the M32, M4 and M5 motorways, which travel to cities including Bath, Swindon, London and Cardiff in Wales, across the Severn Bridge. Although the traffic in and out of the city can be particularly heavy during peak commuting hours (07:30 to 10:00 and 16:00 to 18:00), driving in central Bristol is fairly easy. Several roads are one-way only and part of Bristol's city centre is restricted to buses and taxis only, although this is always clearly sign posted.

Many tourists staying in Bristol choose to rent cars and these are the best method of transport when travelling outside of the city, to explore the surrounding countryside and nearby towns. There are plenty of parking garages and off-street parking areas available in Bristol, although some areas are restricted to residents only and parking permits are required. There are also park-and-ride services that operate at Portway, Tollgate and Ashton, where you can park your car on the outskirts of Bristol and travel into the centre by bus. These park-and-ride services are well sign posted from all routes into the city.

Bristol is well pedestrianized and one of the best ways to travel around is simply by foot. This is an excellent way to see some of Bristol's numerous tourist attractions, museums, galleries and landmarks. Finding your way around the city centre is very straightforward and many of the major sights and tourist attractions are within easy walking distance of each other. 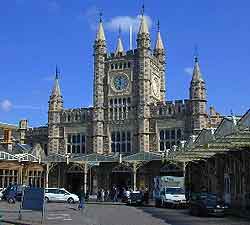 Bristol is an important centre for rail travel and Temple Meads train station is located in the Temple Meads area of Bristol, close to Bristol city centre. There are regular trains that travel throughout the country, including Bath, London Paddington, Birmingham, Cardiff, Exeter and Penzance. The city's other train station, Bristol Parkway, can be found to the north of the city and has good connections to London Paddington and South Wales. This is the quickest way to travel to nearby Bath, which takes around 25 minutes, and to reach London, which takes around one and a half hours. Advance seat reservations on the train can be booked if required.

Tel: +44 (0)117 955 8211
The bus station is situated on Marlborough Street and is served by National Express coach services from all over the United Kingdom. 'First' operates buses in and around Bristol and there are many bus routes that travel into the city centre. Useful bus routes in Bristol travel to Temple Meads, Clifton Village, Clifton Triangle, Broadmead and Spike Island. Bus passes are available for set periods and these can be particularly convenient when travelling in Bristol. There are also bus stops throughout Bristol, with bus timetables and route information.

Taxis in Bristol are one of the most convenient ways to travel around and are usually reasonably priced. They can be easily caught from the taxi rank outside of the Temple Meads train station, and during the day on St. Augustine's Parade. Also in quieter areas, taxis can be ordered by telephone and there are a number of reputable taxi firms that your hotel can recommend. Additional taxi charges are often made for luggage, travel late at night, extra passengers and travel on public holidays.

Bicycles are a popular way to travel around recreational areas of Bristol in particular, and much of the city is generally very flat, although there are some steep hills in areas of Bristol. There are also numerous cycle trails and pathways throughout Bristol, which are often particularly scenic. The city has a number of bicycle rental shops available, should you fancy a cycle.