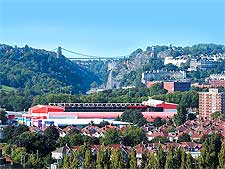 Whilst there are many claims that Bristol's history goes back to Roman times, the first real evidence of settlement here is thought to be somewhat later.

During Saxon times, the city was known as Brigstow. Its earliest settlers built a bridge and a village at the confluence of the Avon and Frome rivers.

Bristol on the Rise

By the 11th century, Bristol was a flourishing port town. During this period, fortifications were built, including a wooden castle and ditch. This was later redeveloped to include an impressive stone keep.

By the 13th century, Bristol had become a city of some importance. King John was one of several monarchs who visited at that time. There was also considerable building activity, with churches springing up around the existing St. Augustine's Abbey. The diversion of the River Frome allowed sea trade to extend beyond England, Wales and Ireland, to Spain and France. In 1373, Edward III granted Bristol a Great Charter of Liberties, which gave it borough county status and created a Corporation of Bristol. During this time, a number of city Guilds were also set up, such as that of the Merchant Taylors in 1399.


In the centuries that followed, Bristol gained a reputation as the starting point for the discovery of new territories. In 1497, the navigator John Cabot set off from Bristol on his journey to America. Merchant businessmen were also drawn here by the prospect of trade in everything from slaves and sugar to timber and tobacco. 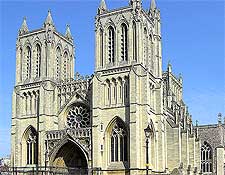 From Tudor Times to the Civil War

Bristol did not escape the changes brought about by Henry VIII's Reformation. These included, in 1542, the renaming of St. Augustine's Abbey as Bristol Cathedral. On the whole, the city seems to have fared well, however, with many of its wealthier inhabitants taking over land previously owned by the church.

By the early 17th century, Bristol Castle was falling into disrepair. The castle's fate was finally sealed following the English Civil War, when it was demolished by order of Parliament. Over time, the site was used to accommodate residential streets and shops. Such developments were fuelled by the city's growing prosperity from the slave trade and the new industries. 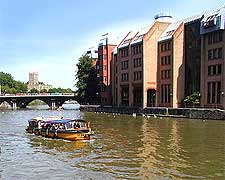 By the end of the 18th century, Bristol was facing stiff competition from other English ports. The city was also feeling the effects of the abolition of the slave trade. However, the arrival of the railway in 1841 did revive the city's fortunes somewhat, turning it once again into one of Britain's leading ports.

As a consequence of severe damage by German bombing during the Second World War, Bristol saw considerable post-war redevelopment, with the addition of new housing, universities and cultural centres.