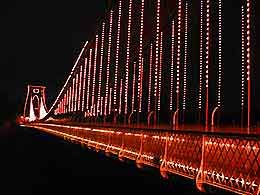 Bristol is served by a number of airports, the closest and most convenient of which is Bristol Airport (BRS), situated on the outskirts of Bristol. London Airports, including London Heathrow Airport (LHR), London Gatwick Airport (LGW), London Stansted Airport (STN) and London City Airport (LCY) are also within easy travelling distance of Bristol, by either train, coach or car.

Bristol Airport (BRS) is situated just 12.5 km / 8 miles south from the centre of Bristol, located in the suburbs of Bristol. This important, busy airport deals with large numbers of passengers throughout the year and Bristol Airport has excellent facilities.

Bristol Airport (BRS) has one main terminal building, serving a large number of different airlines at the airport.

The city centre is easy to reach by several major roads. Follow the A4174 Ring Road and head towards the centre. The city is well sign posted and the journey between Bristol Airport and the centre of the city can take as little as 15 minutes, but during the morning and evening rush hours the journey may take over 30 minutes. Bristol Airport (BRS) is also located close to the M4 and M5 motorways.

Coaches are readily available at Bristol Airport (BRS) and travel to many areas of Bristol and all over the country. The coach services here are operated by National Express.

Taxis are readily available at Bristol Airport outside of the airport's main terminal building. They provide a convenient and easy way to travel into nearby Bristol and other destinations. The journey into the city centre will take around 15 minutes, depending on traffic. Official taxi cabs should be used at all times to ensure safety and also to avoid being overcharged.

The airport taxi meters at Bristol Airport (BRS) start at a basic fare, but additional charges are usually made for luggage, late-night driving and travel on public holidays, so it can prove useful to ask the taxi driver about these before leaving. Some Bristol Airport taxis are happy to accept credit cards.