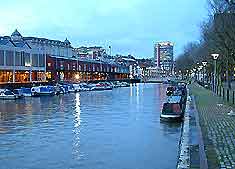 Many beautiful Bristolian buildings have evolved to become home to popular museums, with those owned by the City Council featuring free admittance all through the year. One of the most notable is the Georgian House on Great George Street, sandwiched between Brandon Hill Nature Park and the University of Bristol, and within walking distance of the Hippodrome.

Located alongside the Bristol Temple Meads Railway Station is the British Empire and Commonwealth Museum on the Clock Tower Yard, which actually occupies the old railway station - a Grade-I listed building designed by acclaimed architect / engineer, Isambard Kingdom Brunel. Also very much of note is the Bristol Industrial Museum on Wapping Road, next to the Floating Harbour, and the Blaise Castle House on Henbury Road, on the far northerly outskirts of the city, close to the Hanbury Golf Club and the Greenhill Plantation.

Address: Princes Wharf, Wapping Road, Bristol, BS1 4RN, England
Tel: +44 (0)117 925 1470
The Bristol Industrial Museum is situated in Princes Wharf in the docklands and has many interesting exhibitions about the city's important maritime past. Attractions at the Industrial Museum feature more than 400 exhibits, including information about the slave trade in days gone by, cars, lorries, coaches, motorbikes, tug boats and steam engines, all of which were produced in this area.
Open hours: Saturday to Wednesday - 10:00 to 17:00
Admission: free

Address: 7 Great George Street, Bristol, BS1 5RR, England
Tel: +44 (0)117 921 1362
The Georgian House is a historic townhouse, located just off the busy Park Street, and provides an interesting insight into 18th-century Bristol life. Built in 1791, the Georgian House was originally home to John Pinney, a West Indian wine merchant, and the house is displayed as it would have appeared over 200 years ago, both above and below stairs, including the servants' quarters.
Open hours: April to October, Saturday to Wednesday - 10:00 to 17:00
Admission: free

Address: Clock Tower Yard, Temple Meads, Bristol, BS1 6QH, England
Tel: +44 (0)117 925 4980
Opened to the public in 2002, the British Empire and Commonwealth Museum is situated in the Temple Meads area of Bristol, close to the train station. With 16 themed galleries, this attraction explains the history behind Britain's empire, including a large section on the Victorian era. Other attractions here include many original artefacts, interactive exhibits with state-of-the-art technology, special events, temporary exhibitions and guided tours of the permanent galleries.
Open hours: daily - 10:00 to 17:00
Admission: charge, discounts available for seniors, students, children and families

Address: Henbury Road, Henbury, Bristol, BS10 7QS, England
Tel: +44 (0)117 950 6789
Blaise Castle House Museum is located in the Henbury area of Bristol and is houses in a stunning 18th-century country house, in the glorious parkland of the Blaise Castle Estate. The Blaise Castle House is full of historic exhibitions and displays, with attractions including a folk collection, a large collection of children's toys, dolls, model trains, costumes, a replica of a typical Victorian schoolroom and many fascinating items from Victorian households, such as historic wooden washing tubs. Blaise Castle is situated nearby and is within easy walking distance from the museum.
Open hours: April to October, Saturday to Wednesday - 10:00 to 17:00
Admission: free

Address: Locking Moor Road, Weston-super-Mare, Bristol, BS22 8PP, England
Tel: +44 (0)1934 635 227
The International Helicopter Museum is situated in Weston-super-Mare, close to Bristol. This unique museum features more than 50 helicopters and autogyros, as well as exhibits of models, photographs and displays detailing how the aircraft actually work. Attractions at Weston-super-Mare's International Helicopter Museum include a ride simulator, the G-Lynx (the world's fastest helicopter), a gift shop, a café, a playground area for children and 'Open Cockpit' days, where visitors can try out the pilot's seat of a real helicopter and receive instructions from the guides.
Open hours: October to April, Wednesday to Sunday - 10:00 to 16:00, May to September, Wednesday to Sunday - 10:00 to 18:00
Admission: charge, discounts available for seniors, children and families

Address: 12 Denmark Street, Bristol, BS1 5DQ, England
Tel: +44 (0)117 927 5036
The Harveys Wine Museum is one of the city's most interesting and unusual, featuring cellars that date back more than 800 years. Harveys has been trading here as wine merchants since the late 18th century and attractions at Harveys Wine include guided tours, tastings, a shops with a vast selections of wines, and a highly regarded restaurant with an exceptional wine list.
Open hours: daily, bookable in advance
Admission: charge

Other museums nearby Bristol include: