Situated on the College Green, on the western side of the city centre and close to the Central Library, is the city's Anglican cathedral, which came into being in the early 12th century and is officially named the Cathedral Church of the Holy and Undivided Trinity.

Serving as the official Diocese for the city since the middle of the 16th century, Bristol Cathedral boasts a series of historic Gothic windows, a huge pipe organ, sweeping vaulted ceilings and many original medieval features. Measuring in at roughly 90 metres / 295 feet in length by around 40 metres / 130 feet wide, this is a giant structure. Various alterations to the facade have occurred over the centuries, including the addition of a Gothic Revival-style nave added in the 1860s. However, it was not until the late 1880s that the western front was finished in its entirety, complete with its two towers. 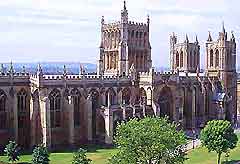 Address: College Green, Bristol, BS1 5TJ, England
Tel: +44 (0)117 926 4879
Grade-I listed Bristol Cathedral was founded in 1140 as an Augustinian monastery and this grand building has developed in a variety of styles over the centuries, becoming a cathedral for the city as long ago as 1542. This Church of England cathedral is vast and is full of history, with many attractions, such as the Norman Chapter House, the Abbey Gateway, the colourful early English Lady Chapel, regular musical performances, a café and a gift shop. There are numerous highlights that are immediately apparent, such as the stunning architecture, countless grotesque gargoyles and the cavernous interior. Of note, there is also a small, quiet garden outside.
Open hours: daily - 08:00 to 18:00

Address: Broad Street, Bristol, BS1 2HL, England
Tel: +44 (0)117 927 7977
Located in the city centre, St. John's is a 14th-century Anglican structure and is interestingly one of the city's smallest historic churches. Attractions here include a clock tower, a tall spire, thick medieval walls, an attractive nave, beautiful detailed architecture and many other ancient, historic features.
Open - Tuesday and Thursday - 13:00 to 14:00 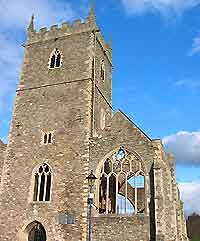 Address: Victoria Street, Bristol, BS1, England
Temple Church, situated in the Redcliffe area of Bristol, was built with poor foundations and as a direct result, the tower started to lean many years ago. These dramatic ruins date back to the 14th century, being originally built on the site of an even older church. The structure was badly damaged in the Second World War and has remained as a poignant reminder of the past ever since.
Open hours: daily - 24 hours

Address: College Green, Bristol, BS1 5BT, England
Tel: +44 (0)117 929 4350
Located in the city centre, St. Mark's ranks amongst the city's most ancient churches and was founded in the early 13th century, when it was the chapel of the Bristol Hospital of the Gaunts. Visitors can expect to find some spectacular stained-glass windows that date all the way back to the 16th century, along with statues, impressive architecture and a vaulted roof with exceptional attention to detail. Despite being in the centre of this busy city, St. Mark's Church remains a peaceful and relaxing place to visit.
Open hours: Tuesday to Saturday - 10:00 to 12:00, 13:00 to 16:00

Address: 10 Redcliffe Parade West, Bristol, BS1 6SP, England
Tel: +44 (0)117 929 1487
St. Mary Redcliffe is widely believed to be one of the finest examples of medieval churches in England. This large and imposing structure was constructed over a period of around 200 years by the merchants of Bristol. Highly regarded by Queen Elizabeth I, attractions here include guided tours, a small gift shop and regular concerts.
Open hours: daily, November to April - 09:00 to 16:00, May to October - 09:00 to 17:00
Admission: free

Address: 36 The Horsefair, Bristol, BS1 3JE, England
Tel: +44 (0)117 926 4740
Situated in the Broadmead shopping area, in the heart of the city centre, the John Wesley's Chapel is actually the oldest Methodist building in the world and dates back to 1739. This chapel is in remarkable condition and has been well preserved, remaining completely unspoiled and appearing as it once did more than 250 years ago. Notable attractions here include the preachers' rooms above the chapel, along with the pulpit and Wesley's original preaching gown, riding whip and bedroom. There is also a small gift shop at the chapel.
Open hours: January to February, Monday to Saturday - 11:00 to 14:30
March to December, Monday to Saturday - 10:00 to 16:00
Admission: free

Here is a list of the main churches in the Bristol area. 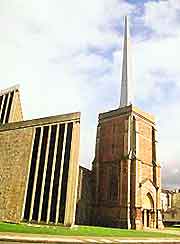