Getting Around, Aarhus Travel, Transport and Car Rental 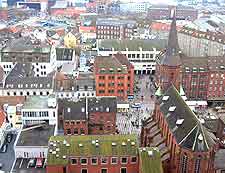 It is simple to reach the city and many visitors choose to fly into the nearby Aarhus Airport in Tirstrup, and then use bus transport or hire cars to travel to their chosen destination. Aarhus is a particularly clean city and its streets are well laid out, meaning that one of the best ways to travel around the actual city centre is simply by foot.

Regular ferry transport travels between Aarhus and the Danish city of Kalundborg around six times each week day, and less at the weekends. This trip is extremely popular with tourists and lasts just over two and a half hours, while further ferries connect Odden in around an hour.


Consider purchasing the city's Aarhus Pass if you are intending to use public transport extensively, since it allows you to travel on the buses completely free of charge for set periods of up to a week, and also offers sizable discounts for museums and other notable attractions.

Address: Stabrandvej 24, Kolind, DK-8560, Denmark, DK
Tel: +45 087 75 7000
Located at around 40 km / 25 miles to the north-east of the city centre, the busy Aarhus Airport (AAR) operates mainly as a domestic airport, with daily flights by Scandinavian Airlines linking Copenhagen. The airport is connected by regular bus transport and can be reached in around 45 minutes. Amongst the main airports operating here is the Danish Sun Air of Scandinavia, along with British Airways and also Ryanair. By road, Aarhus Airport can be reached from the city itself along Route 15, which is known locally as the Fruerlundvej.

A number of prominent highways radiate outwards from Aarhus and include the E45 (north to south), and also Route 15 (west). The E45 operates as a useful ring road and arcs around the westerly side of the city, with central Aarhus being linked by roads such as the Ahavevej and the Randersvej. Whilst the city centre is perhaps best explored simply on foot, renting a car is a perfect way to travel to attractions on the outskirts of the city, such as Moesgard. A number of large car parks are scattered around the city centre, with one of the most popular being located beneath the Scandinavia Centre Aarhus, a notable conference centre. Street parking is indicated by various parking meters (billetautomats), being charged between the following hours: 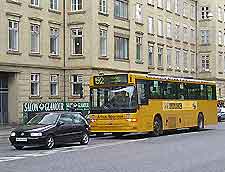 A comprehensive public bus network operates within the city, of Aarhus with the majority of city buses regularly stopping outside of the railway station, or close by, along the Park Allé. Bus tickets can actually be purchased from a ticket machine located at the far end of the bus, allowing unlimited travel between the time period, which is usually two hours. Many visitors choose to purchase a 24-hour bus pass, which allows them to use bus transport free of charge throughout the Arhus County, including travel to both the Lake District and Grenaa. Klippekort tickets (clip cards) and bus passes also offer good value and can be purchased from the Aarhus Tourist Office, along with many of the newsstands. 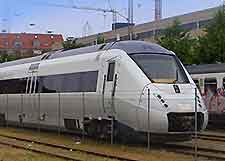 Train transport links many Danish cities close to Aarhus, with regular trains travelling to Copenhagen (via Odense) roughly every hour from early morning until as late as midnight, with a journey time of three hours. Many further trains travel to cities and towns across Denmark, such as Fredericia (just over one hour), Frederikshavn (two and a half hours) and Vejle (45 minutes).