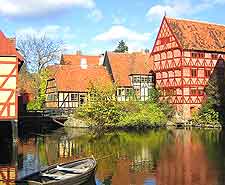 A city of culture and brimming with some of Denmark's very best art galleries, you can spend literally days and days exploring the many museums within Aarhus. Particular favourites include the Den Gamle By, which is located within the Old Town area of Aarhus and set in the open air, with historical buildings grouped to resemble a provincial town.

For more information about Denmark's rich Viking heritage, pay a visit to the Vikinge Museet (Viking Museum) and view the endless artefacts. Those looking to appreciate some Danish art works should consider spending an afternoon visiting the modern ARoS Kunstmuseum, which is a relatively recent addition to the art scene in the city and opened its doors to the public in the spring of 2004. 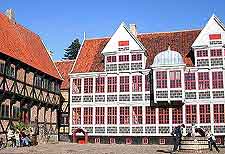 Address: Viborgvej 2, Aarhus, Denmark, DK
Tel: +45 086 86 1231
The acclaimed open-air museum comprises some 75 different picture-postcard buildings, all of which have been meticulously restored and rebuilt, being transported to this spot from all around Denmark. Within the Den Gamle By you can expect to find a fully working bakery, along with a silversmith and various traditional shops and pharmacies. The majority of the buildings are partially timbered and date from the 18th and 19th centuries, and can be found around 1.5 km / 1 mile to the west of Aarhus city centre. Take a stroll along the cobblestone streets and look out for the windmill and the historic water mill.
Open hours: daily, June to August - 09:00 to 18:00; April, May, September and October - 10:00 to 17:00; November, December, February and March - 10:00 to 16:00; January - 11:00 to 15:00
Admission: charge, discounts for children 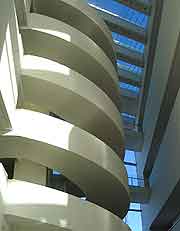 Address: Vennelystparken, Aarhus, Denmark, DK
Tel: +45 086 13 5255
Located on the southern side of the university and home to a wealth of Danish art work from the 18th century onwards, the ARoS Aarhus Kunstmuseum is a leading art museum and amongst the largest within northern Europe, standing at no less than ten storeys high. From the outside, the exterior of the ARoS simply resembles a floating red-brick box, while inside, visitors will be overwhelmed to find nine dedicated spaces displaying paintings and sculptures from all over Denmark, along with an extensive foreign collection, comprising the works of many notable artists from Germany and the USA, amongst other countries.
Open hours: Tuesday to Sunday - 10:00 to 17:00, Wednesday - 10:00 to 20:00
Admission: charge, children free

Address: Universitetsparken, Aarhus, Denmark, DK
Tel: +45 086 12 9777
There are two exceptional museums situated within the Universitetsparken (University Park). The first of these is the Naturhistorisk Museet, which celebrates various aspects of natural history and includes an array of stuffed and mounted exotic animals, displayed in attractive dioramas. Nearby, the Steno Museet is a popular science museum, where the long and interesting history of science is explored in great detail. Along with the numerous anatomical and medicinal exhibits, there is also a planetarium, where regular sky shows take place at 11:00, 13:00 and also 14:00.
Open hours: daily - 10:00 to 16:00, Steno Museet closed on Mondays
Admission: charge, discounts for children 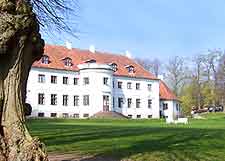 Address: Moesgard Allé 20, Aarhus, Denmark, DK
Tel: +45 089 42 1100
The Moesgard Museum lies on the southerly outskirts and around 8 km / 5 miles south of central Aarhus. A visit to this attraction is the perfect way to spend a morning or afternoon, and the Moesgard area itself is also filled with interesting sites. Within the Moesgard Museum are displays from not only the Viking era, but from as long ago as the Stone Age, with many flint axes and ancient examples of pottery. Perhaps the most notable exhibit is the Graubelle Man, who is known to be around 2,000 years old and remains extremely well preserved, complete with leathery skin and even hair, being found in a neighbouring bog in the early 1950s.
Open hours: April to October, daily - 10:00 to 17:00; November to March, Tuesday to Sunday - 10:00 to 16:00
Admission: charge, children free

Address: Sankt Clements Torv 6, Aarhus, Denmark, DK
Tel: +45 089 42 1100
Celebrating Denmark's rich Viking heritage, the Vikinge Museet is completely free of charge and is therefore extremely popular with visitors to the city looking for something quick and interesting to view. The museum itself is filled with a series of excavated Viking artefacts, which were actually found on this very spot in 1964 and date from between the 10th and 15th centuries. This particular settlement is thought to have been one of the earliest in Aarhus and today is home to a fully reconstructed house, an actual skeleton of a Viking, and many ancient pots and tools.
Open hours: Monday to Wednesday, Friday - 10:00 to 16:00, Thursday - 10:00 to 18:00
Admission: free

Address: Tomsagervej 25, Aarhus, Denmark, DK
Tel: +45 086 25 4144
One of the biggest and most impressive museums of its kind within the whole of Europe, the Danish Fire Brigade Museum is known locally in Denmark as the Det Danske Brandvaernsmuseum and is home to around 100 different fire engines and fire-fighting vehicles from various periods. The oldest vehicles on display were actually horse drawn and are surprisingly small compared to modern-day standards. The Det Danske Brandvaernsmuseum is situated around 5 km / 3 miles to the west of the actual city centre and is easy to reach, lying off the Viby Ring Road (Ringvej).
Open hours: April to October, daily - 10:00 to 17:00; November, February and March, Tuesday to Saturday - 10:00 to 16:00
Admission: charge, discounts for children