Aarhus Weather, When to Go and Climate Information 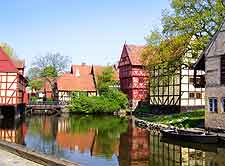 The climate of Aarhus can be described as temperate and marine, featuring weather typical of Denmark. Aarhus is sited on the peninsula of Jutland and this region is so large that it features many temperature fluctuations throughout the year.

December, January and February tend to be the coldest months of the year in Aarhus, where overnight frosty weather is most likely. However, the summer months of June, July and August are quite different, with daytime temperatures of up to 25°C / 77°F or 27°C / 81°F, or even higher at times, when the sunny weather is at its best.

The summer months are the time of the year when most people choose to visit Aarhus. Visitors can expect a pleasant and warm climate, with some hot days and plenty of sunshine to go around. With such high visitor numbers, Aarhus hosts many of its main celebrations during the summer, such as the 'Arhus Festuge', which takes place each year from the end of August to the beginning of September, and is amongst Scandinavia's very biggest festivals.

The summer months can be a little wet at times, although even the rainiest of weather rarely spoils the day and sunshine is usually just hiding behind a cloud or two. Spring tends to feature the driest climate in Aarhus. However, in general, precipitation levels are spread fairly evenly across the seasons and by no means excessive.