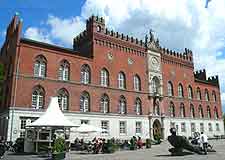 The most visited of all the tourist attractions within the Danish Lake District, Himmelbjerget is sited within easy striking distance of Aarhus and is better known to many as the Sky Mountain. Silkeborg is currently the youngest and also the biggest town within the whole of this region and was established in the middle of the 19th century. 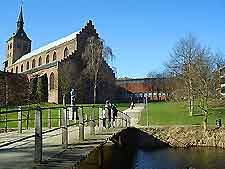 Located on the northern part of the island of Funen and some 146 km / 91 miles south of Aarhus, Odense is known for its rich Viking heritage and has grown to become the third-biggest city in Denmark, with a population approaching 200,000 residents. Odense promotes itself as the city where Hans Christian Andersen was born, with a number of related attractions, such as the HC Andersens Hus, a museum celebrating the life of this famous children's author. Also of interest in Odense is the Fyns Kunstmuseum (Funen Art Museum), the Montergarden city museum, and the Sankt Knuds Kirke, an attractive 12th-century Gothic cathedral with an especially ornate, guilded altarpiece from the early 16th century. 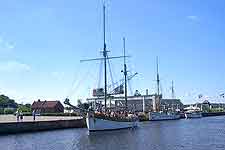 Within easy striking distance of Aarhus, Mariager can be reached in around one hour and lies approximately 65 km / 40 miles to the north. Mariager contains a number of interesting recreational attractions, where visitors can stop and unwind. Museum buffs will appreciate the historical artefacts housed within the Mariager Museum, while others will simply enjoy a ride on the paddle steamer, which crosses the Mariager Fjord in the summer and measures just over 20 metres / 66 feet, or the old-fashioned steam train rides to Handest.

An interesting industrial town some 88 km / 55 miles west of Aarhus, Herning has long been associated with its textile mills and cultural attractions. The Herning Museum on the Museumsgade is often of interest to many visitors and contains an extensive collection of period furnishings, along with a number of prehistoric treasures. For some impressive Danish art, don't miss spending some time at the Herning Kunstmuseum at the Birk Centerpark, on the eastern outskirts of the town centre. 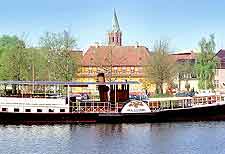 Himmelbjerget towers some 147 metres / 482 feet, making it amongst the tallest of all the hills in Denmark. Those who reach the hill top will be greeted by a tall observation tower, which offers breathtaking views across the lakes and verdant countryside. Daily paddle steamers connect the Himmelbjerget with Silkeborg during the summer months, with the trip lasting just over one hour. 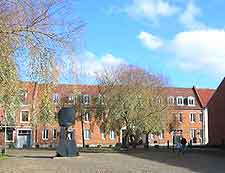 Those choosing to visit Randers will find this city some 40 km / 25 miles north of Aarhus, within central Jutland. Randers can be found where the River Gudena actually meets with the Randers Fjord, and is known to have been founded at the beginning of the 14th century. Although there is little in the way of tourist attractions in Randers, there are so many trains and roads passing through the city that it is quite likely that you too may pass through here. If you do stop off in Randers, be sure to check out the half-timbered buildings within the city centre, such as the Paaskesonnernes Gard, and also pay a visit to the Randers Regnskov, a domed tropical zoo with many exotic creatures. 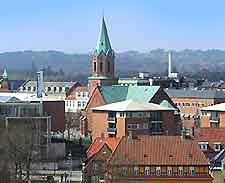 The attractions within Silkeborg can be found some 48 km / 30 miles west of Aarhus and can therefore be reached in under an hour. Attractions to look out for include the Silkeborg Kunstmuseum (Museum of Art), the Silkeborg Museum of Cultural History, and the Aqua complex, where fish, waterfowl and even otters all come together. Hiking and cycling are also available close by, in the forest at Nordskoven.