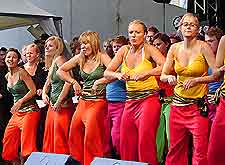 There are always things to do in Aarhus, with a number of well-supported festivals taking place over the year, particularly during the summer months. Visitors will find regular performances, operas and musical events at the Musikhuset Arhus complex, which is home to two separate concert halls and resides in the very centre of Aarhus on the Thomas Jensens Allé, with the larger hall being capable of accommodating audiences of around 1,600 people.

Another important venue in Aarhus is the theatre known locally as the Arhus Teater on the Bispetorv, which is actually the biggest theatre in the whole of Denmark's Jutland area and contains no less than five stages. Many further theatrical performances, events and open-air concerts are staged in the Vestereng Park, often attended by large crowds.


The middle of July is always a busy time in the city, since this is when the internationally acclaimed Aarhus International Jazz Festival is held, over a period of ten days. This is followed soon after by the massive event that is the Aarhus Festuge Festival, which takes place in the latter part of August and during early September, growing to become one of the largest festivals of its kind not only in Denmark, but in the whole of Scandinavia.