Getting Around, Antwerp Travel, Transport and Car Rental 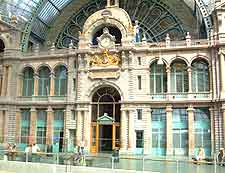 In general, much of Antwerp is really too large to explore properly on foot and most visitors either choose to hire a car or travel around on the public transport. Antwerp is home to a surprisingly exhaustive selection of transport options, which are run by De Lijn and include buses, trams and also a premetro - a type of tram that travels underground for some of its route.

De Lijn provides a number of ticket and informational booths around central Antwerp, where you are also able to obtain useful transport maps, completely free of charge. If you intend to travel outside of the city centre, it will be necessary to purchase tickets for the relevant zones.


Tickets usually allow unlimited travel for up to one hour, although day passes are also available for an extra charge. Antwerp's main De Lijn transportation centre can be found on the Franklin Rooseveltplaats and close to the railway station.

Address: Deurne, 2100 Antwerp, Belgium
Tel: +32 03 285 6500
Antwerp International Airport is extremely close to the city centre and is actually a mere 5 km / 3 miles away. The airport provides a simple way to reach the city and each year serves just over 150,000 passengers, with airlines including Abelag, Welcome Air and VLM Airlines, which offers flights from both London and Manchester. Airport facilities include a Telenet Hotspot providing Internet access within the Extra-Schengen zone, a Belair restaurant with views across the apron, meeting rooms for up to 20 people, and a business lounge area. Public transport includes buses, which travel to the nearby Antwerpen-Berchem train station, while taxis are also on hand to take you directly to your hotel. 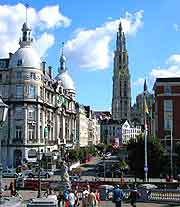 Driving in Antwerp is considerably easier than the far bigger city of Brussels, although it is quite likely that you will still suffer similar problems when it comes to finding parking spaces, although the central riverside quay (Zuidterras hanger) is generally a safe bet. The majority of street parking is metered, extremely popular and often quite hard to come by. Those choosing to rent a car in the city or at Antwerp Airport will find it an invaluable mode of transport, particularly if you plan to travel outside of the city's environs and explore surrounding municipalities, towns and cities. Popular day trips include Brussels, Grimbergen, Kapellen, Lichtaart, Lier and Mechelen, all of which can be easily reached by car. 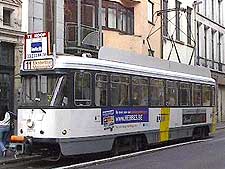 Operating a comprehensive bus network, the main bus hubs in Antwerp are the Koningin Astridplein and the Franklin Rooseveltplaats, where both city (stad) and regional (streek) bus transport arrives and departs. Do make sure that you are not only travelling on the correctly numbered bus, but also in the right direction, since most bus routes travel from one side of Antwerp to the other. The city also features a popular tram and similar two-line pre-metro network, which is both cheap and convenient, and travels as far afield as Deurne, Hoboken and Mortsel. 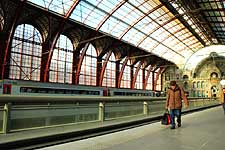 The Centraal Station is located along the Koningin Astridplein and is a particularly grand building, with an impressive neo-Baroque facade, dating back to the latter part of the 19th century. Many travellers choose to arrive in Antwerp by using train transport and the Centraal Station is situated just 1.5 km / 1 mile outside of the city centre, next to the De Keyserlei stretch and close to many shops. A secondary train station (Berchem) lies a further 2 km / 1.5 miles to the south-east.

Taxis remain one of the most popular forms of transport in Antwerp and are well suited to short journeys around the city centre. Most taxis tend to congregate outside of the Centraal Station, on the Groenplaats, and also next to the nearby Koningin Astridplein bus station.