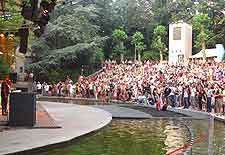 Belgium is very into its festivals and the city of Antwerp is no exception to this, with an array of traditional events and things to choose from. Throughout the year in Antwerp there are many jazz festivals, large concerts, religious parades and film extravaganzas to choose from, particularly in the summer season.

The end of July is a time for music lovers, when many open-air concerts are staged all around the city, particularly around the Grote Markt and the Groenplaats, being completely free of charge and part of the summer festivities. Other popular venues include the Lotto Arena Antwerpen (Sportpaleis), the Stuurboord, and the Stadsschouwburg, known for its enormous capacity and world-class performers.