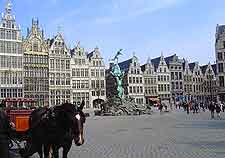 Many good hotels are situated within Antwerp's Old City district, along with an increasing number of guesthouses and B&Bs concentrated on the southern side of the city (t'Zuid), near to the Royal Museum of Fine Arts (KMSKA). Generally accommodation and lodging of all kinds is quite affordable in Antwerp and many hotels choose to drop their rates slightly at the weekends.

The budget accommodation scene within the city of Antwerp tends to be a little variable, although the popular New International Youth Hostel remains a good bet and a popular alternative to hotels and is around a ten-minute walk from the central train station, next to the Jewish neighbourhood and along the Provinciestraat. There are also two camping sites located close by, on the banks of the River Scheldt (De Molen) and near to the Bouwcentrum (Vogelzang), both of which are open from April to September. 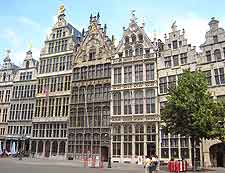 Some of the most popular hotels in Antwerp are to be found in the City Park area and often close to Stadspark itself. Many well-known brand names provide a high standard of accommodation, being distributed along stretches such as Charlottalei, Desguinlei and Quinten Matsijslei.

Also nearby is one of the biggest hotels in the whole of Antwerp, the Astride Park Plaza, which lies along Koningin Astridplein. With over 200 guest rooms and extensive lodging facilities, this particular hotel is a favourite of celebrities and is easy to find, standing directly opposite the Eurostar terminal and the central train station itself. 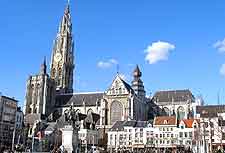 Many people looking for places to stay in Antwerp choose to look for accommodation in the historic Old City, where some of the best overlook the Cathedral of Our Lady (Kathedraal), around the Handschoenmarkt and the Grote Markt square.

Some of the most luxury hotels in this part of the city include the stylish Witte Lelie Hotel on the Keizerstraat, and also the upmarket Hilton Antwerp, which can be found on Groenplaats and alongside the buzzing Grand Bazar Shopping Centre.