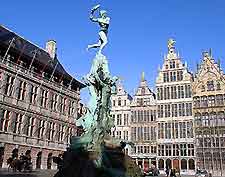 The skyline of Antwerp contains many eye-catching landmarks and historic monuments, such as the Boerentoren skyscraper, which is often called the KBC Tower, since it is now home to the offices of the Belgian KBC Bank NV. Considerably older is Antwerp's landmark of the Cathedral of Our Lady (Kathedraal / Onze Lieve Vrouwekathedraal). Construction of the cathedral (kathedraal) began as far back as the middle of the 14th century and lasted some 170 years.

The Groenplaats (Green Place) is amongst the biggest of Antwerp's public squares and has become an integral part of the Old Town district (Oude Stad). Also prominent and forming the very heart of the city, the Grand Market Square is known locally in Belgian as the 'Grote Markt' and has long been one of the most famous of all the city's oldest landmarks. 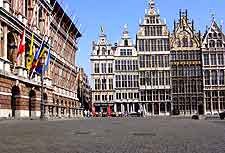 Address: Grote Markt, Antwerp, BE-2000, Belgium, BE
This enormous pedestrianised square is actually triangular in shape and is overlooked by the imposing landmark of the Town Hall (Stadhuis). The Grote Markt is bordered on two sides by a series of Renaissance-style guildhalls, the majority of which was renovated during the 19th century. One of the most impressive of these guildhalls is number seven, where you will find a statue of St. George and the dragon. Close by are plenty of cafes with tables spilling out onto the square itself.
Open hours: daily - 24 hours
Admission: free 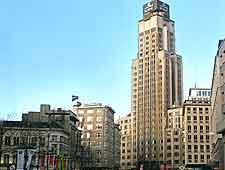 Address: Schoenmarkt 35, Antwerp, BE-2000, Belgium, BE
Tel: +31 03 202 9011
An early skyscraper and the tallest building of its kind in Antwerp, the Boerentoren Tower is second only in height to the considerably older Cathedral of Our Lady and its mighty spire. Dominating the Old Town area, the Boerentoren is around 96 metres / 315 feet high and this beautiful Art Deco landmark was completed in 1930.
Open hours: daily
Admission: free, best viewed from outside 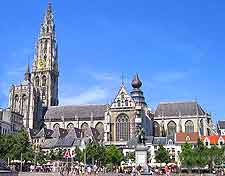 Address: Groenplaats 21, Handschoenmarkt, Antwerp, BE-2000, Belgium, BE
Tel: +32 03 213 9951
One of the most famous and important landmarks in central Antwerp, the Cathedral of Our Lady is an ancient building. Today this Gothic cathedral is listed as a World Heritage Site and its tall spire stretches almost 125 metres / 410 feet into the sky. Inside you are treated to beautiful 16th-century stained-glass windows, many restored frescoes that were actually once painted over, and a number of Baroque-style paintings by local Antwerp artist Peter Paul Rubens. Visited by around 400,000 people each year, the cathedral can seat approximately 2,400 and accommodate just over 25,000 without seats.
Open hours: Monday to Friday - 10:00 to 17:00, Saturday - 10:00 to 15:00, Sunday and public holidays - 13:00 to 16:00
Admission: free, donations suggested 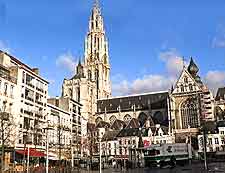 Address: Groenplaats, Antwerp, BE-2000, Belgium, BE
Tel: +32 03 232 0103
On a summer's day, the Groenplaats is at its most lively, with street entertainment, al fresco dining and many local Belgian pubs. The Cathedral of Our Lady presides over the square itself along with the Grand Bazar building, which now operates as the Antwerp Hilton Hotel. Interestingly, the Groenplaats was actually once a central cemetery until the 18th century.
Open hours: daily - 24 hours
Admission: free

Address: Keizerstraat 10-12, Antwerp, BE-2000, Belgium, BE
Tel: +32 03 201 9250
The imposing 17th-century landmark of Rockoxhuis is an striking mansion once owned by Antwerp's mayor, Nicholas Rockox. At the very centre of the Rockoxhuis is a courtyard, around which the building has been constructed. Inside the mansion is beautifully furnished in a traditional Flemish style, with a small collection of paintings, a number of which are by the local Flemish painter Rubens, who was actually once a friend of the mayor himself.
Open hours: Tuesday to Sunday - 10:00 to 17:00
Admission: free 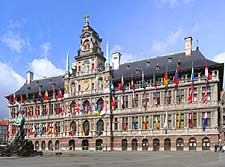 Address: Grote Markt, Antwerp, BE-2000, Belgium, BE
Tel: +32 03 221 1333
The Stadhuis is famed for its palatial facade and successful mixture of Flemish and Italian architectural styles. Completed as far back as 1565, Antwerp Town Hall presides over the Grote Markt and boasts a tall gable, on the top of which is a Ciudad eagle surrounded by statues. The entrance to the Stadhuis can be found on the Suikerrui and guided tours allow visitors to view the interiors of several grand rooms.
Open hours: Monday to Wednesday, Friday and Sunday - guided tours at 14:00 and 15:00
Admission: free