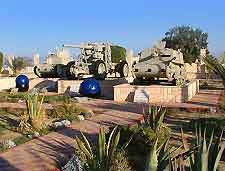 El Alamein in history is best known for the Battle of El Alamein in WWII - a bloody clash that pitted the Allies against the German Afrika Korps. The site is off-limits today, although there are war memorials and a museum here. This Egyptian city is also celebrated for its long beach and marina.

El Alamein was originally a port some 2,000 years ago during the Greco-Roman days. Like nearby Alexandria, however, it suffered during the tsunami of 365 AD, which was formed after a large earthquake hit the Greek island of Crete. The ancient port was subsequently flattened. Interestingly, it is also said that Cleopatra and Marc Antony are buried nearby.

Fast forward to WWII, the most important point in the history of El Alamein, when the Allies prevented the Axis powers from reaching Alexandria. Great battles ensued between Rommel's Afrika Korps (with Italy as the Axis co-power), and the Allies (British and Commonwealth) under Field Marshall Montgomery. 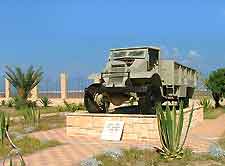 The historic El Alamein Battlefield is a popular day trip from Alexandria today. It is located at the Tel el-Eisa Hill, although is out of bounds for tourists due to the battlefield being littered with mines and ammunition. The nearby War Museum details the battle and comes complete with tanks and munitions out front, and tours arrive here instead. 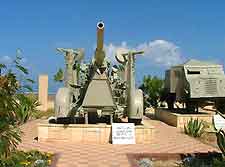 Visitors also typically come to see the war memorials, in several locations. The El Alamein Commonwealth Cemetery is the main one, remembering the thousands of men (mainly British) that died, with their names being poignantly displayed on crosses and limestone walls. There are also various memorials relating to soldiers from Australia, Canada, Greece, India, New Zealand and South Africa. The German Cemetery is in the style of a fort on the Tel el-Eisa Hill and is home to the remains of more than 4,000 soldiers, while the Italian Cemetery also resides on this hill.

The city couldn't be more peaceful today compared with the history of El Alamein. It enjoys a steady flow of tourists visiting the battlefield and cemeteries, and also its long beach and resorts. A marina (the Porto Marina) was built in 2005 and the Marine Tourist Village features shops and eateries.