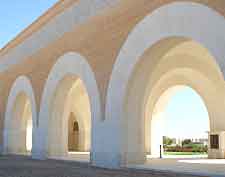 The majority of visitors who make the trek to this relatively unknown part of Egypt's coast are interested in the tourist attractions relating to the famous battle at El Alamein. The Battle of El Alamein was an important moment in the sway of power between the Allied and Axis forces in North Africa during WWII.

There are separate memorials for the soldiers from each of the countries who fought on this battlefield. Other than the historical aspect of El Alamein, there is the exclusive seaside resort area at the marina. The lively Marina El Alamein boasts just about all of the tourist attractions, entertainment, shopping and activity in the area. 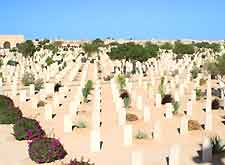 Also known as the British Memorial, the War Cemetery is one of the most impressive sites and main tourist attractions at the El Alamein battlefield. Three archways lead to a wide hall with broad stairs leading up to a rooftop with stunning views of both the memorial and the Mediterranean Sea. The names of some 12,000 British soldiers whose bodies were never recovered are engraved on white limestone walls as a complement to the thousands of gravestones that dot the desert floor outside.
Open hours: call for details
Admission: no charge 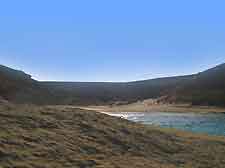 Although many visitors come to El Alamein for its significance during the North African campaign of WWII, the area also boasts some of the finest beaches in Egypt. Most travellers head for the Red Sea resorts, unaware that just a few kilometres from El Alamein, beach lovers can bask in either the opulence of the marina or the seclusion of Sidi Abdel Rahman. Whichever scene appeals to you, the sand is powdery white and the sea deep and blue all along this stretch of coastline.
Open hours: daily - 24 hours
Admission: no charge 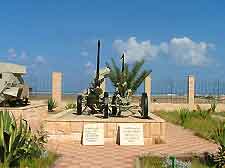 One of the most decisive battles of WWII happened in the North African desert at Tell El Alamein, a hilltop located to the north of the city proper. Although you can't actually walk around the battlefield due to the live mines and ammunition, which still litter the place, you can peer into this desert landscape and imagine the fight that happened here. Along with the War Museum, all of the Allied memorials are located around the War Cemetery, so there's plenty of attractions to see.
Open hours: daily - 24 hours
Admission: no charge

The Marine Tourist Village is considered one of the most prestigious beach resorts in all of Egypt, and it really does pull out all the stops when it comes to luxury resort holidaymaking. The marina's 11 km / 7 miles of perfect beach and the amazing Venetian-like canals of the Porto Marina section offer a little bit of everything within one immaculate area. Although still primarily a wealthy Egyptian resort destination, it is growing in popularity among foreigners as an attraction in itself.
Open hours: daily - 24 hours
Admission: no charge